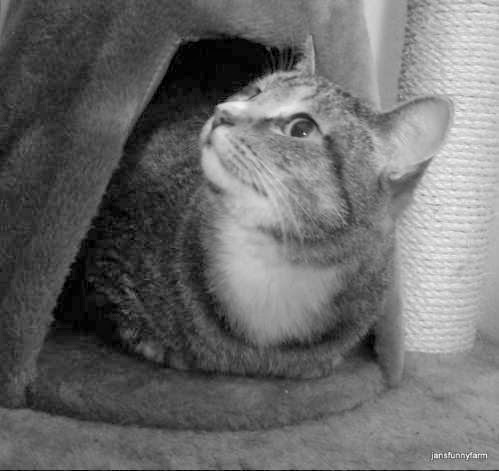 MICAH:  Here, we'll show my handsome face before we scare you.  This is our public service warning to slow down and not try to do something God didn't create you to do.

MARCUS:  And this wasn't my fault either!

CYNDI:  No, it wasn't really your fault, but all of you male dogs were blocking Jan's walking space.

MERCI:  I was sleeping when the crime went down.

SAM:  There was no crime but this is what Jan's face looked like about half an hour after the failed flight attempt yesterday. 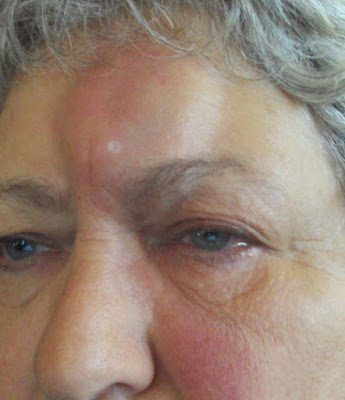 PERCY:  Yep, Jan doesn't usually have that big bump on her forehead.  We have told her and told her she can't fly without wings, but does she listen?  No!

BUDDY:  She was cleaning the bathroom when the phone rang and she dashed into the living room for the computer to turn down the Bill Gaither Homecoming music she likes to listen to when she cleans the house.  She says it lifts her spirits and energizes her. It took her to new heights - and a crash landing - yesterday.

RUSTY:  Have we mentioned before Jan is a klutz?  She tripped over one of our beds and flew across the room, landing on her knees and sliding across the floor taking the TV stand on wheels with her.  The stand stopped rolling when her eye and nose connected with the corner and her head knocked the big TV off the stand.

PERCY:  And Jan complains we knock things over! 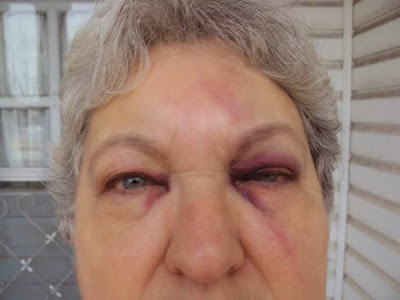 BUDDY:  This is Jan's face this morning. The other injuries are not quite as colorful yet.  I don't think we're going to be around too much for a few days.  She needs supervision and round the clock nursing.

MARCUS:   Excuse me, but has anyone called Bill Gaither and let him know he caused a oneperson - TV pileup yesterday?  I've heard gospel music has soul but who knew it could be so dangerous?