Casa de Buddy Has No Reverse

This is a challenging time at Casa de Buddy-Has-No-Reverse.  We've been busy.  Well, Jan has been busy and Buddy has been busy beating her up.  But we've just been trying to keep out of Jan and Buddy's way. 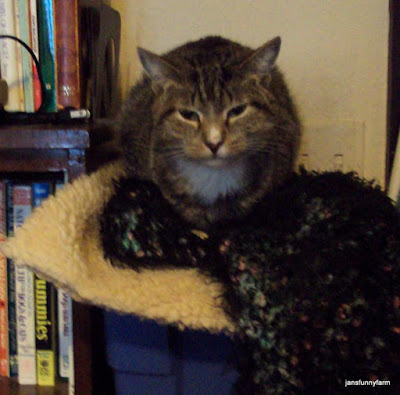 Last week we almost lost Micah.  He'd only been here 4 months and suddenly he had a horrible respiratory infection.  It came to where Jan was trying to figure out how she was going to dig a grave in the cold, hard ground because he wasn't responding.  Last Friday night he started to rally.  Just a little and he picked up over the weekend.  Jan kept feeding him a little at a time and he ate every bite and lapped up the water with it.

He's lost some weight but he started spending his evenings investigating the house.  He was getting really brave until Percy went after him again last night.  Time will tell whether Micah will go back to hiding or stake a claim in the house. 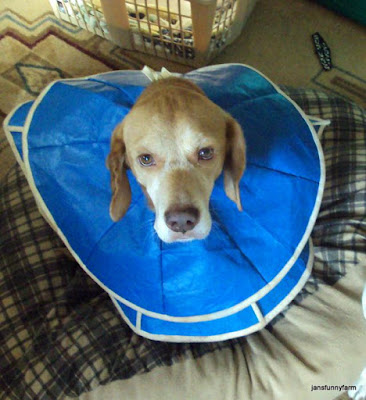 Buddy chewed and licked himself back into the 2 soft ecollars so his skin can heal.  But they didn't stop him, so he had to go back into the HATED plastic ecollar.  (Hated by Jan and anyone / anything that gets near him.) 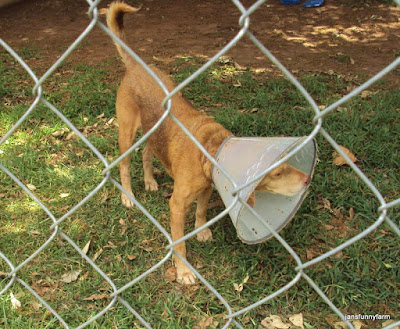 Yep, he's terrorizing the furniture, the house, us furries, and especially Jan again.  He has no reverse.  When he runs into an obstacle, he just keeps banging against it until it moves, the cone bends or he knocks things over.

Jan is so concerned about him beating the light protection off the collar and cutting his neck again that she contacted the manufacturer.  Who said the same thing always said about Buddy - We never heard of such a thing before.  That's cause they haven't met Buddy!

The company has kindly offered to send him an inflatable collar to see if that helps.  We can't wait!

While wearing the cone, Jan notice when she'd remove it so we dogs can take her walking, Buddy would immediately start chewing on a front paw.  It looked fine.  Then she removed the collar and he started chewing and crying.  So Jan took him out on the front porch so he'd be closer to her old eyes, twisted his paw and practically stood on her head, and finally found the problem. 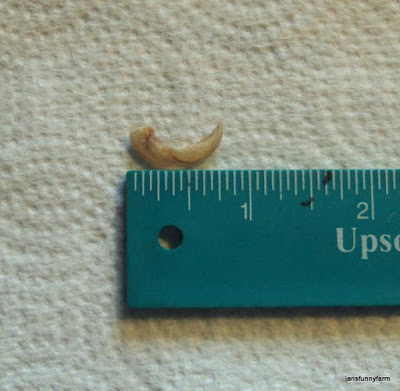 That was only part of one dew claw.  It had curved back so tightly and grown faster than the other one.  Right into his paw.  And the side of his paw had swelled over it so it couldn't be seen except from an uncomfortable angle for both Jan and Buddy.  The only dog clippers Jan has have to go over the end of the nail in order to cut it.  Fortunately, Jan had an old pair of cat clippers that made the cut without cutting Buddy.  But he screamed to loud someone across the street stopped to see what abuse Buddy was getting. 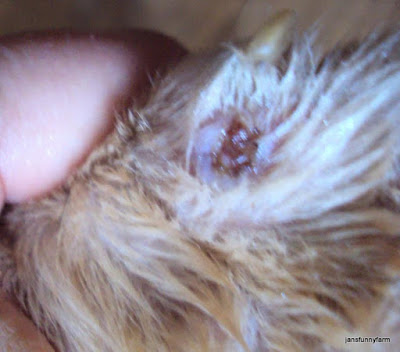 A small cut on Jan's leg started getting infected.  She isn't able to go walking with us dogs and screeches like she's being killed if any of us even get within sprinting distance.  But Buddy keeps sneaking up and ramming / scraping the ecollar on the infection site.  (Do any of you have any spare ear plugs?  We could use some.)  If any of your humans would care to pray for her Jan, we're sure she'd appreciate it.  So would we.