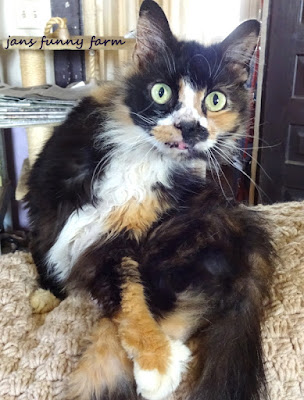 Cyndi:  Is it Friday already?

Rusty:  Yesterday was Thursday and tomorrow is Saturday, so, yes, this would be Friday.

Cyndi:  Good.  That means it's time for another Mousebreath interview.

Rusty:  Who do we have this week?

Cyndi:  You know who we are interviewing, Rusty!

Rusty:  I know I know, but they don't know.  I was pretending to be your second bandana.

Cyndi:  I think you mean my second banana.

Cyndi:  You don't like bandanas either, so why don't we just tell everyone the subject of our interview.

Cyndi:  Hey, stop!  This is my post and I do the announcing!

Rusty:  But you said to tell everyone.

Rusty:  Since when does we mean me?

Rusty:  I think I'm getting a headache.

Cyndi:  I know just the cure for that, Rusty.  Our interviewees this week will make you smile.

Cyndi:  Speak up, Rusty.  You're supposed to ask who our interviewees are.

Rusty:  I already did and you called me a banana.

Cyndi:  I'm about to call you fired.

Rusty:  I was never hired so you can't fire me.

Cyndi:  I have an idea.  Why don't you tell everyone the news.

Rusty:  You've confused me and I can't remember.  You tell them. 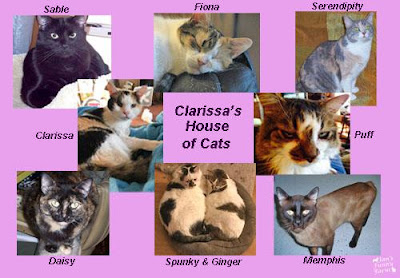 Cyndi:  Okay, This week we interview the cats from Clarissa's House of Cats.  Their interview, Clarissa and 13 Furblings, can be read at Mousebreath, the ezine by cats for cats.

Rusty:  Let's not forget to post Johnny's photo.  Their mom didn't send a picture of all of them, so Johnny sent his own.

We are joining the Pet Parade hosted by Rascal and Rocco, Basil the Bionic Cat, Barking from the Bayou and Owned by a husky.
Pawed by Jans Funny Farm at 6/09/2017 12:30:00 AM