Merci:  A couple of weeks ago we watched a big bird land high up in a tree.  Jan pulled out her camera as we hot-footed it toward the tree.

Marcus:  We stopped.  While holding tightly to our leashes with one hand, Jan raised the other arm high above her head -

Buddy:  And the bird popped up and spun around with its back to us.

Merci:  Jan has a problem finding a target with one arm in the air.  (Remember when she aimed for the sky between two trees and took a picture of the house instead?  An Aiming Problem.)

Marcus: When she downloaded the pictures, the bird was missing in the first few; however, she did manage to shoot the target in two ... sort of. 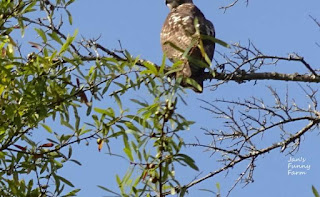 Buddy:  As you can see, here is most of a bird from the rear.  We're pretty sure it had a head when it landed, but Jan decapitated it. 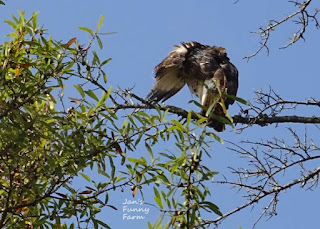 Merci:  With precision timing, it flapped its wings just as Jan took the second shot.

Buddy:  We're curious as to what type of bird it is and are hoping someone might recognize the markings.  It's a long shot, but worth asking.

Marcus:  Whatever it is, the next time we see it, I'm going to invite him for lunch.

UPDATE: We are posting close-ups of the bird.  Sorry for the poor photos, but if Jan can miss the sky to hit a house, she can certainly decapitate a bird.  We would suggest you not let her take your picture - just in case! 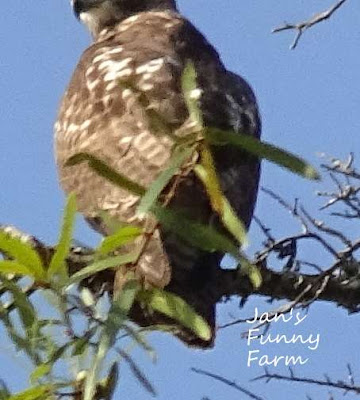 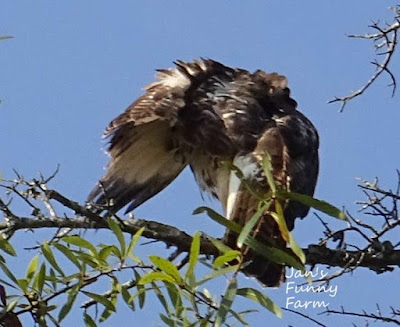