Cyndi:  Do you remember the bushes around the house that have grown wild this summer?  (Click to read Seven Dollars and Change.)   Jan finally started on the three in the front Saturday.  She started cutting out the growth that doesn't belong.  One part was twisted among the bush, so she grabbed it and yanked hard to the left.  Then SCREAMED!  Yep, two snips, one yank and she was finished pruning. 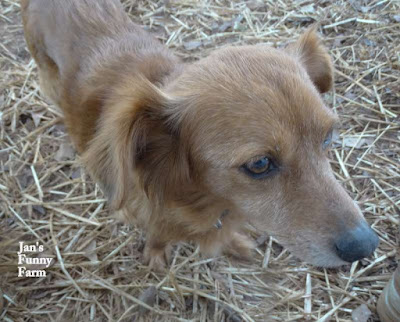 Merci:  You have to tell the whole truth, Cyndi.  Jan stopped because she was stung.

Merci:  That's what Jan would like to know.  There was what could have been a flattened black flying insect plastered against her arm.  And there were suddenly three or four black unknowns insects flying around the area she'd been working.  They didn't attack her and they might have had nothing to do with what happened.

Merci:  That was Jan's first thought since we usually have wasps flying around the front, but it looked more black than brown or red and it was a bit hard to identify a flat bug with one terrified glance.  Not that she stopped to study it!  And she couldn't find a body when she went back to look.  But it gave her a good scare!.

Cyndi:  And a sore arm.  Ice took down the swelling and closed over the hole.  But now she's wondering if there's still a stinger in there.  On the other hand, she sure hopes it wasn't a spider!

Cyndi:  I'm just thinking about that poor bug minding it's own business and suddenly ... ouch!

Merci:  You'd better wipe the smile off your face before you go in to dinner.  That's what happened to Jan.