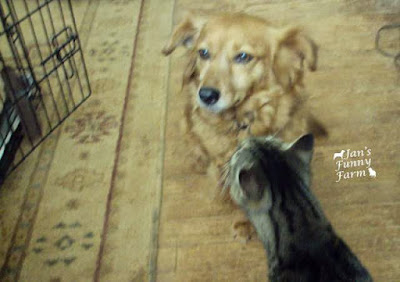 PERCY:  Hey, Merci, what happened to you.  Your toes are purple on one paw.

PERCY:  I have time.

MERCI:  Well, I was sound asleep when all of a sudden my paw was stomped!  I opened my eyes and it was Marcus in one of his playful moods.  He knows he isn't supposed to roughhouse in the house, but he was leaping and barking and trying to get Sam to play.

PERCY:  But Sam doesn't like to play with Marcus.  Marcus plays rough.

MERCI:  Yes, Sam doesn't remember when he did the same to Buddy and me.  He's almost twice Marcus's size, so he played rough too.

PERCY:  So Marcus stomped your foot and that's why your toes are purple?  That wasn't a long story.

MERCI:  I wasn't finished.  I leaped to my feet to get out of Marcus's way and stepped on a cat ball with the same paw.

MERCI: I tried to limp around Marcus when Sam did a sudden spin and he stomped the same foot!  I thought someone had dropped a concrete block on my paw.

PERCY:  Wow, that would really hurt.

MERCI:  I wanted to get out of the way, so I limped to my bed in the bedroom where I lay down and tried to nurse my throbbing paw.

MERCI:  Actually, the bruise doesn't show.  Jan wasn't watching where she was walking and she tripped over my bed, spilling grape juice on my painful paw.  And that's why my toes turned purple.

NOTE:  Now before anyone gets upset, this is Fractured Fryday Hairy Tales day and we needed a story to go with this month's phrase, " And that's why my toes turned purple."  So we made this up.  Merci is fine.  No woofie was injured in the writing of this story.  Since this is a house of accidents, though, we thought we should tell you that this one is not true.  :) 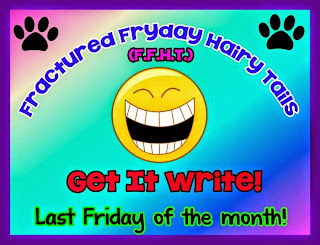 Fractured Fryday is hosted by Murphy and Stanley's blog.  The rules are under the FFHT tab.


RUSTY:  Well, now that we're done with fairy tales, let's get to a true story.

CYNDI:  This week we interview Lola and Lexy from the Lola the Rescued Cat blog. 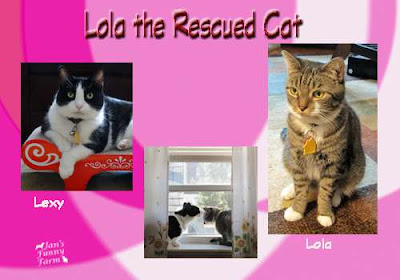 PERCY:  Their story, Heart Singing Lola and Heart Melting Lexy, can be read exclusively at Mousebreath, the ezine for cats.


Join the Pet Parade blog hop hosted by Rascal and Roscoe.  It is co-hosted by Bionic Basil, Barking From the Bayou and Love is being owned by a husky.
Pawed by Jans Funny Farm at 9/25/2015 05:00:00 AM