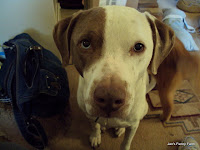 Buddy, Merci and I don't care a lick about the doghouse and we sure don't want Jan to be able to use it for a jail when we've been bad.  Not that I would ever be bad.  Jan just gets these silly notions.

So first the Nutty Ninja Squirrels showed up to offer assistance and then the Cracked Nut Chipmunk Command arrived to help.  Personally, I think they just came to eat our stash of pecans and tiny acorns  Last installment, Rusty was out of pecans and considering waving the white flag of defeat before the chipmunks and squirrels held a nutless mutiny.

But I'm Rusty's hero.  Yep, I saved his occupation.  Rumpydog commented Rusty should call in the Navy Seals.and get his butt outta there.  That gave me an idea.  I called the Navy Seals.  But they were busy and couldn't make it before April.  So I called the Marine Seals and they waddled right over. 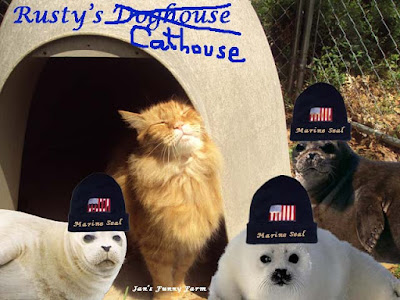 Yep, thanks to me, the squirrels and chipmunks are gone. Something about they can't stand the overpowering smell of fish. So Rusty has won. The doghouse is now his.