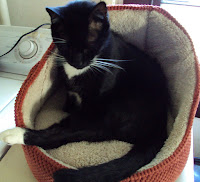 Hey, Cameron here.  We finally figured out why Buddy was testing his pipes the other day.  He was practicing for a duet with Tucker.

Tucker likes to sing and play the piano several times a day.  We are of the unanimous opinion Tucker could use a few more piano lessons.  His vocals, though, are perfect - great rhythm, good vocal range and clear enunciation.  :)

Many of you have heard of the recent raid on Caboodle Ranch which used to have a reputation for being clean and well-run.  It is sad and scary to read such accounts because it tells us that those who are working hardest to make a difference for animals are being targeted for prosecution and destruction, not just by those who oppose animal rescue efforts but by alleged animal rescuers and protectors.  We disagree with PETA, their agenda and their methods!

Stop by the Caboodle Ranch blog and read Caboodle's side -  the top two post.


On the other hand, Craig is being accused of being a hoarder, even though the cats had a 30-acre property to roam.  How did the numbers grow to 700?  There were reports prior to this that neighbors were shooting cats on Caboodle property.

In Georgia, a rescue must be a non profit registered with the state.  They are subject to the same state regulations and unexpected inspections as any other shelter. We assume it is the same in Florida, so we wonder how this could happen to Caboodle Ranch or any other rescue.  If conditions were as bad as written about, where were the safeguards and / or the inspectors?  .

We are reserving judgment on this subject, but we have questions.  Many questions.  And we wonder which rescue will be targeted next?