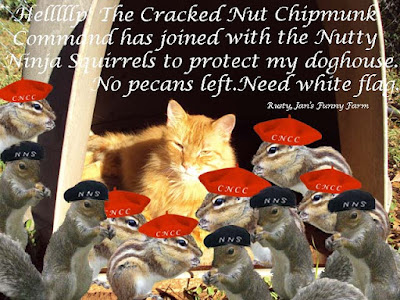 Uh-oh, Rusty's plan to occupy his doghouse seems to have hit a snag.  The Cracked Nut Chipmunk Command heard he has a stash of free pecans and acorns.  They marched into the pen last night to help. (We don't believe the CNCC or the NNS care about his cause.  We think they just came for the freebies.)

Rusty's volunteer troops multiplied and he's now run out of pecans to feed them.  Sounds like he's ready to surrender before he has a mutiny on his paws and he's trapped in his doghouse.

Any of you have a white flag for Rusty to wave?  Or some pecans you'd be willing to donate to his cause?   Rusty has occupied through the wind and rain and without any privacy for his litter pan.

We hope his occupation doesn't end in disaster.  As nutty as Rusty is, we were secretly hoping he would win. 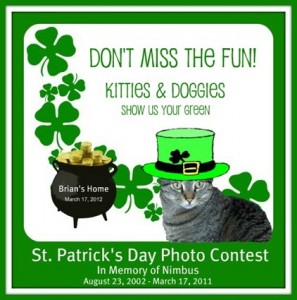 Voting is open for the 2012 Nimbus Memorial St. Patrick’s Day Photo Contest over at Brian's.  There are two categories, kitty and doggy.  We entered Buddy and Sam in the doggy contest but didn't get a kitty entry made in time for that category.  Be sure to visit Brian and take a look at the entries.  And while you're there, even if you don't vote for our entry, vote.
Pawed by Jans Funny Farm at 3/13/2012 09:55:00 AM