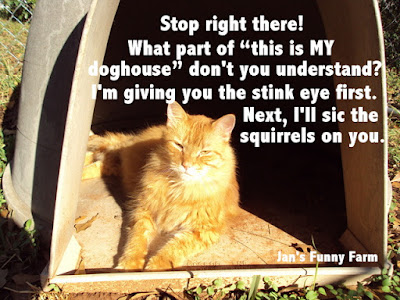 We have another stand-off here.  Last week Jan wanted to put Sam in my doghouse because he ate half a stick of butter.  He claimed extenuating circumstances, that one of us kitties knocked the butter dish to the floor, the lid came off ... and, well, what was he to do when faced with temptation?  That's easy.  He shouldn't  have eaten forbidden food in front of Jan!

The same day - yes, the very same day Jan was caught with her thinking cap off and Sam has been trying to put Jan in my doghouse ever since.  Aside from the fact Jan wouldn't fit through the entrance, this is private property and I'm guarding it.  The dogs had their chance to claim it, but they're all afraid of it.

Do you remember when Buddy was wearing the cone and he cone-butted everything as hard as he could to get it off which destroyed the protective strip around the plastic?  Jan had to take the cone off and walk him with a harness because his neck had a big bloody owie.  It didn't take long before he was dragging her down the road cause the harness strengthens his chest muscles.  When his neck healed, Jan put him back in a halti for walks.  He was doing so well, she decided to stop using the halti and walk him with his collar and leash. 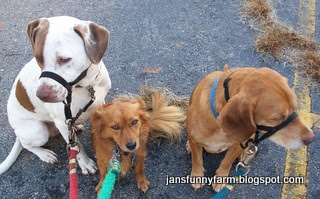 Sam and Buddy wearing their haltis.  Merci doesn't wear one.

And he was a good boy - for Buddy.  He didn't tug until he choked or try to pull Jan down the road (usually) and Jan thought he'd finally settled down.  He was even paying attention and anticipating turns, stops and starts.  Jan was so pleased with him.

Until last week when she found the underside of his neck wet, took off his new-in-January collar and used a mirror to see his raw and bald again neck.  Buddy is out of the collar and back in a harness and so far behaving himself on walks.  His neck is healing well.

So what's the problem?  Well, Sam insists that if eating butter is a doghouse jail offense, so is Jan not standing on her head when she leashed Buddy so she could have noticed the raw neck sooner.  And he keeps trying to push her into my doghouse.

I think they need to build themselves a jail to resolve this issue.  Or maybe put Jan in stocks in the dog pen.

How do you think we should resolve this?  Before you answer, remember me moving over to let prisoners inside is not an option!


It's G-rated bath day over at The Tabby Cat Club, hosted by Mousie. Percy and I are members, but do you think Jan could come up with an entry for us? I'm almost tempted to move over and let Sam try to push her in my doghouse. I said almost!