We hope you all had a nice Christmas.  We did.  Until Jan's cousin called late Christmas night to let her know her cousin's younger sister died unexpectedly at their extended family gathering.  That does put a damper on a celebration!

And then yesterday, Jan learned we have not only a cat hater but a cat killer living too close for comfort.  She is so relieved none of us go outside, but sad for anyone who has lost a cat or cats to him, especially the neighbor who confronted him and was angrily told he'd kill any *&^# cat coming on his property and had already killed 44.  We're not sure whether that number includes the ones he had city animal control trap and take to the shelter to kill a few months ago or that's the number he's trapped and killed on his own.  Either way, that man is evil!  And breaking the law.  We will see what comes of this.

Recently Jan smelled something burning and couldn't find what it was.  Until Rusty came strolling through the room with his floofy, ginger and white tail black on one side.  (This is why Jan HATES these gas space heaters, which sit on the floor.) She grabbed a cold wet cloth and a camera.  These are the best photos she could manage while trying to hold a squirming dog-size cat with one hand and take photos with the other. 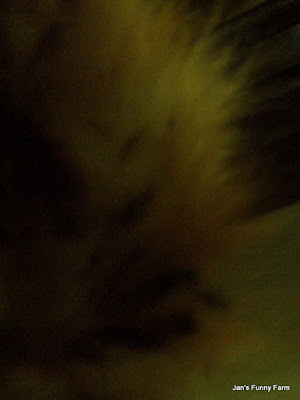 And this picture with flash.. 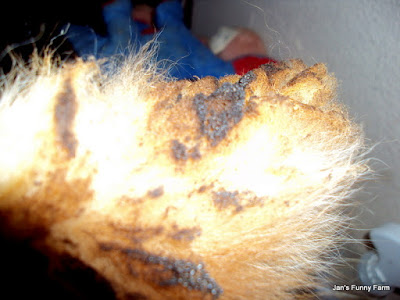 We all laughed at the look on Jan's face when she wiped Rusty's tail with the wet cloth a few times.  All the black came off and his tail was fine.

And lastly, this is why Jan rarely shares her food with any of us.  (Or so she says.  We think she just wants to eat it all herself.)  Not that we don't manage to steal some once in a while.  Like the raisin bran muffin Jan brought home last week and set on the table for a few minutes.  Neither Buddy nor Sam will admit to stealing and eating the muffin, paper and all.  Not even a burp for a hint. But this is the story of a dog named Buddy and the $10,000 burrito.

Oh, and PS - regarding the question we asked about Blogger and Picasa in our last post.  We have had to resort to uploading these photos to an album of OUR choice in Picasa.  This is not our idea of a solution but it's the only way we can post photos now.
Pawed by Jans Funny Farm at 12/27/2011 09:42:00 AM