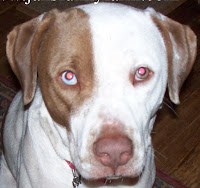 Pssst, Sam here. I wanted to post today to remind you all of a couple in Brazil who currently have 16 dogs they have taken in from the streets - abandoned dogs, older dogs, dogs with health problems. There are so many dogs in need there but they can only rescue as many as they have room to keep. Some live inside the house and some live outside.

Now 16 might not sound like many to those of you involved in rescue, but we're not talking about a rescue in the United States. This rescue is in a poor area of Brazil. Not long ago the husband ran a bakery trying to make enough money to pay the bills and even though it didn't make much, he still fed the starving dogs in the area, even if it was only bread.

Then came the floods and the bakery no longer exists. But still they have 16 dogs and themselves to provide for. Instead of sitting at home crying about the situation, they got involved in helping with dog rescue and feeding in areas hit worse than they were. If you scroll down their posts, you can read about some of their ventures.

Since there is no bakery and no income, they are again facing the loss of their home and the dogs they have rescued and vetted. For a while they were getting a few donations but the donations dried up and ... well, we hate to think of them losing everything after having accomplished so much with the dogs. If you can possibly spare a few dollars to help, there is a Chip In widget at the top of their page, They aren't aware we are posting this, but we know they would be grateful. We hate to think of them losing everything after giving so much.