You've probably forgotten who I am. I'm Cyndi. And I'd like to present to you today two special humans who have/are dealing with cats with Cerebellar Hypoplasia. We posted a link to a video on this subject back in October of 2009. You can find the video link here.

This subject came up because a new blogging friend is fostering a cat with two small kittens that have been diagnosed with severe CH. She has been struggling with what to do for them. A shelter automatically euthanizes such animals and since this blogger is only fostering, she doesn't own the kittens, so she has been agonizing over what to do and even whether she would be allowed to make a decision for the kittens. 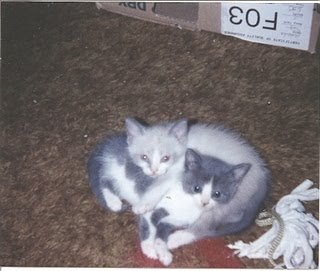 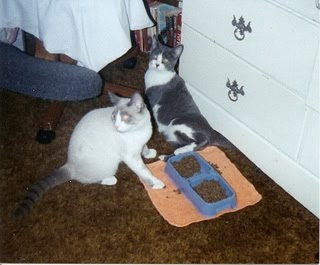 Aren't they cute?  Dusty is the lighter one and  Deter is the darker.


A dear friend sent me your web site because she knew I'd been in your shoes. 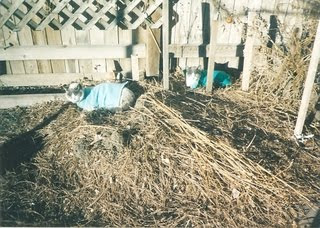 Back in 1999, after fostering a lot of adult cats and kittens, I was given a pregnant soon to be mama. She gave birth to four beautiful babies, which I put in a large box in my bedroom closet for privacy. When after 4 weeks she hadn't brought them out to learn about their new world, I did only to be shocked at seeing them not being able to walk. Or should I say walk normally. In the past I'd had crippled cats, but not as babies. 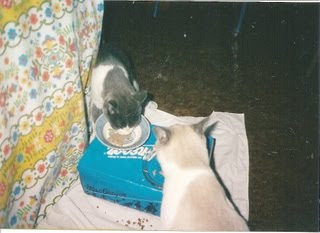 There were two females, and two males. I didn't know what to do so I went to the vet who had already seen mama cat. She checked all four over and told me about Cerebellar Hypoplasia. What???? She gave me information on this condition, and I also wrote to other vets, and vet hospitals about it. Learning it was a permanent disability was not good news. I had hoped it was something they (only the two males had it) would grow out of. I worked with the smaller male to teach him to walk and to focus since he was very content to sit and watch his siblings play. I named him Dusty since he was like a little dustball. His brother seemed more determined to do what his sisters did regardless of how clumsy he looked. I named him Deter because of this.


At 8 weeks or so, the two females were adopted, and I was certain I could find just the right home for 'my boys'. I made a special poster with their photos on and placed them in nearby vet hospitals. I received several calls of interest, but none wanted them 'if' they would not be normal. If they had been blind, deaf, with three legs it would be okay, but not this permanent disability. Little did I know then their forever home would be with me.


I've have been so blessed by them being a part of my life. Dusty would make it four years. With my daughter's, and grandaughter's help, physical therapy gave him his own way of walking, eating and drinking. He developed a heart problem; while Deter developed a urinary problem. Special diet for each, but that was okay. I didn't mind the extra time and energy it took to care for them. When the day came I knew Dusty had had enough of this life; two of my children went with me to the vet. She reminded me to give Deter more attention now because of the loss of his brother. I did even though I had a special rescued female, Precious. The three of us moved to Maine, where Precious lived out the remainder of her life.


Now it's just Deter and I, and I wouldn't want it any other way. Yes, he has a paper box, not a litter box. Yes, he has tremors which makes it hard for him to eat. Yes, he falls way too many times, but I can see how much he loves life. Where we are he can watch chipmunks, squirrels and birds. In 2008 I bought a pet stroller for him, so I have company on my daily walks. 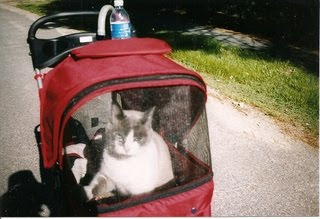 He's a little ham in that he loves humans or dogs to stop and say hello. He is quite a joy, and shows me everyday to love life just as I am. He is my best bud, my cuddle muffin in bed and such a sweet cat I don't know if I would want a 'normal cat' again. I love him dearly and believe we were meant to be together.


I hope my story will be of some help.

That is one story of CH kittens. The story of the two kittens that prompted this post is still up in the air. We have been moved by the way the "foster mom" blogger has gotten a diagnosis and is weighing her options, trying to learn what she can legally do as the foster mom and what she should do that is best for the kittens.   Should they be euthanized or adopted out? Taking on special needs pets is a big responsibility and requires extra time.  Not everyone would take on the challenge or have the extra time to invest. (It was never the foster mom's intention to keep any of the kittens, whether or not they are healthy, and keeping either or both is not an option.)

You can tell this has been weighing on Kittykye the blogger's mind and she is determined to do her best for these kittens, no matter what the outcome. We hope you will go by her blog and leave her an encouraging message because she obviously cares deeply for these two kittens. At the moment, she's cautiously optimistic and has decided not to make a decision for another week. Kittens can make progress in a week.  So we're optimistic these two kittens might become another Dusty and Deter story.

If you aren't aware of it yet, Tesla is having a Clean + Green giveaway. We reviewed the product last year and really liked it so we thought we would help Tesla and the CB get the word out. If you haven't tried C+G before or you'd like to win some of the product, click here to read the details.