Hooray for Our ModKat

Can you hear Jan yelling, Hooray? Well, she's had a frustrating few months because she just doesn't speak cat language properly. No,we take that back. It's probably more like she's so forgetful she doesn't remember how independent we cats are, preferring to make our own decisions of whether, when and where. The woofies might sit on command -- if they feel like it -- but we cats never do!

Do you remember these photos? They're from last November when our new ModKat litter box arrived. Percy and Cyndi checked it out. And Percy, our current lead curious cat, climbed in. 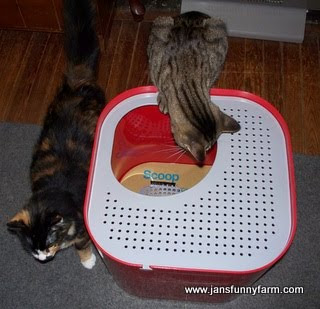 Cyndi: It doesn't look like cardboard. Wonder what it's for? 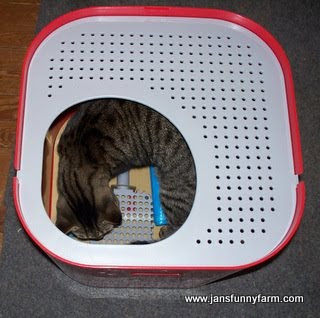 Percy: I don't know. It has a shovel. Maybe it's for gardening.

Well, we drove Jan crazy for several months, either ignoring it or a certain Funny Farmer peeing over the side of the liner. The same kitty (we are not tattling on Per -- uh, the guilty kitty!) pees over the top of the other litter pans but the Modkat is taller.

Our litter quarters are a very tight maize.. The designer suggested Jan take the liner out and the top off until we got accustomed to it. That worked. We could get in and out of it easier. And then Jan finally put the lid back on. And we still used it. We aren't using the liner since Per- uh, one of us sprays over it. But at least he's not spraying outside the ModKat.

Jan feels bad that she told the designer she would try to do a video for him, but her camera has no stamina and only records a very few seconds at a time and she doesn't have any money to buy software to put the clips together or work with a QuickTime MOV file, so she doesn't even try to take video any more. Plus she doesn't have time to hang around the litter box area to try to film us in the litter box. As if we're going to let her!

Jan says it is the easiest litter box to clean. So we want to thank Rich for making Jan's job a little easier. Even though Crystal is no longer with us, she still has a lot of scooping and cleaning up after us to do.

If you haven't heard of the ModKat litter box before, stop over at ModProducts where you can also view their innovative luxury hangers and MakerBot. We have no idea what a MakerBot makes but it's a neat short video.

Don't forget to vote for the race car memorial design for Trooper Jessica. Today is the last day. http://www.sponsafier.com/#/gallery/view/120029

The Bumpass Hounds are back online but we'll put in another plug for their favorite rescue group anyway. After you click to feed shelter and rescue animals at the Animal Rescue Site, if you don't have a favorite shelter to vote for, please vote for Almost Heaven Golden Retriever Rescue of Capon Bridge, West Virginia (WV). They have adopted several dogs from AHGRR, including Radar the blind pup, so they would appreciate your vote to help the rescue.

For those of you non-cat bloggers who don't frequent the Cat Blogosphere, the CB was featured on Pet Blogger Support yesterday. It's a site for pets, not just for cats.