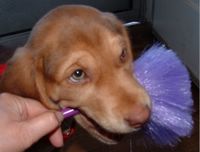 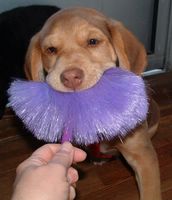 And runs with it.

Oh, what a proud day this is for me. I can’t believe it. My first award. I have the feeling I’m going to continue to be an award winning dog. Jan will have to keep me then. I’m the best writer and the most interesting character at Jan’s Funny Farm.

I was so pleased when Jan presented the imitation feather duster to me after all you wonderful folks voted for me to win the Scruffy Award. She said I won anonymously. I’m sorry, she says I misunderstood what she said. It isn’t possible to win anonymously. She didn’t count the anonymous votes because Miss Merci suggested people vote more than once and that wouldn’t be fair to the other nominees for the award.

By the way, who were the other nominees?

I thought the award would be age-appropriate, something edible, but when Jan presented me with the award and I started to eat it, she took it back. I guess she’s going to frame it and hang it over my award winning half of the bed so everyone will know I’m a winner.

She needed my help again today. Miss Merci was asleep in our room and I was in the living room with Jan. I followed her into the kitchen and what a shock! It looked like a miniature elephant took a leak. I know I can’t hold that much water. There was an absolute lake.

Jan was as impressed as I was. She just stood there and didn’t say a word for the longest time. She glanced in the other direction and saw the newspapers spread about in another lake. Two mini-elephants! This one obviously tried to clean up after itself with the newspapers.

Then she noticed the water bowl she had just filled with two pots of water was tilted and held only a few drops. Forget the mini-elephants, it was those kitten critters playing where they shouldn’t again.

I did my best to help her. I lapped up as much water as I could hold, but I had just finished a bowl of dry food, a bit of canned food and some little acorns in the front yard. For once, I was full. Jan mopped up what I couldn’t drink and when she went outside to throw the sopping newspapers in the trash can and empty the bucket, she took me along so I could empty my own water bucket.

What a day, and it’s barely noon. I need a nap to recover from all the excitement.