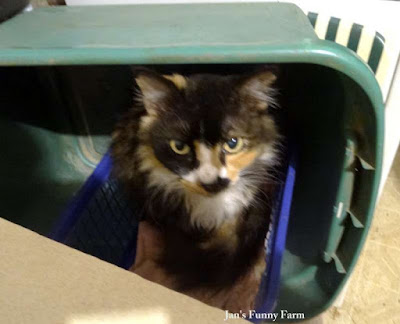 Cyndi:  Here I am reporting from inside my space ship.

Percy:  You are not.  You're sitting in a basket inside a plastic storage bin.

Cyndi:  You didn't need to tell everybody.  I was trying to add a little spice to our post.

Percy:  You've been reading too many of Marcus's posts, only he calls it "fairy dust". 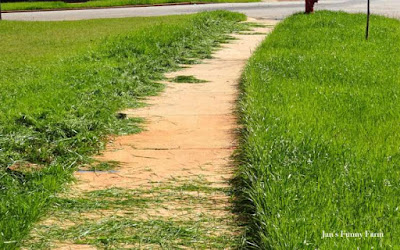 Marcus:  Hey, aren't you guys going to tell everyone what a good job I did snoopervising Jan cutting that new grass by hand again?

Percy:  There's nothing to brag about.  You watched her work.

Cyndi:  She wasn't going to let it get over knee high again, so she went out Monday and cut a strip down the inside of the sidewalk with those grass shears.  Then she went back to the property line and started cutting the rest with the grass whip.

Marcus:  It was hard work.  She was huffing and puffing and-

Percy:  She thought she was going to have to quit because she could barely breathe and had a lot of pain.

Marcus:  And a knight rode up on a big white horse wearing a suit of armor.

Cyndi:  Are you on something, Marcus?  A guy rolled up in a white truck, jumped out, and came around the back of it waving his arms and saying, "Stop.  You can stop now.  I'll come back in the morning and finish this."

Percy:  She did not.  She stared at him.  Then she took a second look at the truck.  Yep, there was the city logo on the side.  The city doesn't mow private property, not even a strip.  They do, however, send a county jail crew around occasionally to cut the curb side of the sidewalk, which they own.

Cyndi:  The guy said, "Here, I'll give you a card with my cell number.  You call me tomorrow to remind me and I'll have this taken care of.   They (meaning the contract company installing the new water lines) used too much fertilizer."

Marcus:  Early Tuesday morning there was a man on a riding mower that cut the curb side of this block and then went across the street.  Jan was so relieved she wouldn't have to cut it all by hand she called the cell number to say thank you and said she'd finish our side.

Percy:  "No, no, I'll give the guy (on the riding mower) a call and he'll take care of it."  And he did.  "Someone will be along to blow it off the sidewalk,"  the mower guy said.  And after a while, here came the work crew down both sides of the street. 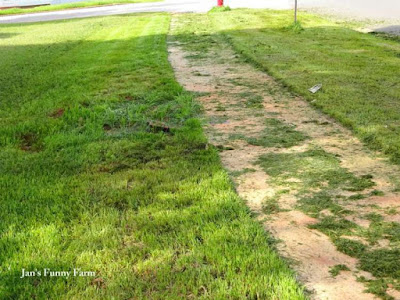 Cyndi:  She learned after the first grass cutting adventure that she is very allergic so she is grateful for being rescued again.

Marcus:  And thanks to a very sweet blogger who wanted to help Jan purchase a weed eater so she wouldn't have to cut that fast growing grass by hand again, but after this second "adventure", Jan realized she couldn't handle one with a cord.  (And she remembered the fiasco when she borrowed a power tool and accidentally cut the cord.)

Percy:  The only electric one someone recommended was too expensive and Jan isn't sure her shoulder could handle a cordless.

Cyndi: So she'll continue to entertain us.  And probably the neighbors.  She  liked the idea made in several comments earlier this month, but she doesn't think the city would be too happy to see a goat grazing in the yard.

Marcus:  I think that would be such fun.  I could chase it and we could play fetch and soccer.  I could have him for lunch and -