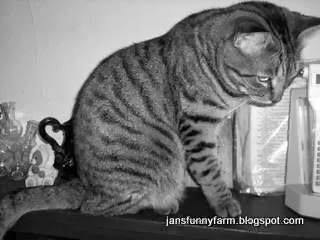 Percy:  Do I look a bit perplexed here?  I probably am since there has been a lot of perplexing confusion going on around here lately.

Cyndi:  We actually have not resolved the computer confusion of last Friday.

Micah:  This has forced Jan to struggle to understand about profiles and administration and who does what and even who she is since she appears to be in her profile more than once.

Merci:  Or is that more than one profile in her whatever-it's-called?

Sam:  She should have learned this before but it's always been a bit much for her to comprehend.  Now her head is spinning and we're trying to stay nearby in case it flies off and we have to catch it.

Buddy:  For this reason, we hope you will forgive us but we're going to post an urban legend today.  We know it's an urban legend because Snopes says so.  http://www.snopes.com/humor/jokes/autos.asp.

Cameron:  But that's okay.  It's funny and applicable.  And if we had money to bet, we'd bet you all feel the same way.  Here's the urban legend.

In response to Bill's comments, General Motors issued a press release stating: If GM had developed technology like Microsoft, we would all be driving cars with the following characteristics:

1. For no reason whatsoever, your car would crash twice a day.

2. Every time they repainted the lines in the road, you would have to buy a new car.

3. Occasionally your car would die on the freeway for no reason. You would have to pull to the side of the road, close all of the windows, shut off the car, restart it, and reopen the windows before you could continue. For some reason you would simply accept this.

4. Occasionally, executing a maneuver such as a left turn would cause your car to shut down and refuse to restart, in which case you would have to reinstall the engine.

5. Macintosh would make a car that was powered by the sun, was reliable, five times as fast and twice as easy to drive - but would run on only five percent of the roads.

6. The oil, water temperature, and alternator warning lights would all be replaced by a single "This Car Has Performed An Illegal Operation" warning light.

7. The airbag system would ask "Are you sure?" before deploying.

8. Occasionally, for no reason whatsoever, your car would lock you out and refuse to let you in until you simultaneously lifted the door handle, turned the key and grabbed hold of the radio antenna.

9. Every time a new car was introduced, car buyers would have to learn how to drive all over again because none of the controls would operate in the same manner as the old car.

10. You'd have to press the "Start" button to turn the engine off.


Rusty:  We are trying to figure out why young humans can learn all this new technology so quickly and old fossils like Jan have to struggle with it.

Marcus:  I know the answer.  Jan keeps saying the wood in this house is so old it's petrified, so it stands to reason young kids have squishy brains to absorb new learning while old brains are too hard for new material to filter through.

Sam:  I don't believe it.  I keep hearing, Out of the mouth of babes.  The young squirt might have something there.