Merci:  Marcus got into another fight yesterday and you won't believe with whom ... uh, with what.

Rusty:  He claims he took a chunk out of the other guy ... I mean his opponent, but I don't know.  The photos tell otherwise. 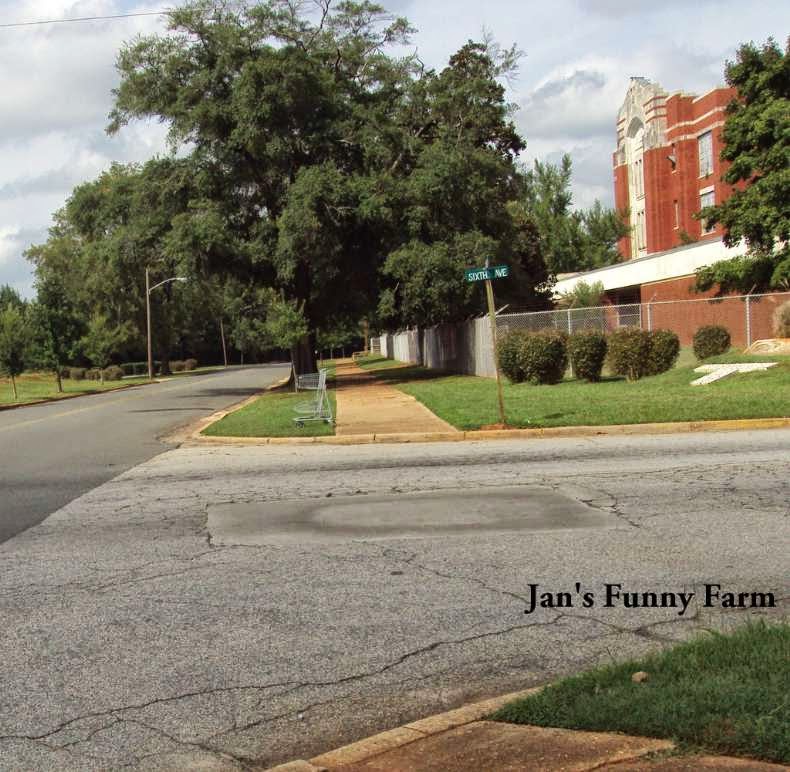 Buddy:  But first we'd like to show you something that irritates the dickens out of Jan.  Take a look across the street.  What do you see in front of the tree?

Micah:  A shopping cart!  Not that I've ever met one but it sure look like something Jan has steered home a time or few.

Sam:  Right, Micah!  And we helped Jan put that shopping cart there on our morning walk.

Cyndi::  But why would you leave it sitting on the corner and not return it to its rightful owner like Jan usually does?

Cameron:  Because Jan didn't borrow it from the store.  She finds carts that someone borrowed to help walk their groceries home abandoned along the road.

Marcus:  But if someone borrows one and then abandons it, that would be stealing. So they are thieves?

Percy:  Yes, and Buddy says he's seen abandoned carts occasionally pushed into the ravine or the woods by kids.

Mercy:  And when carts are destroyed or never returned, all the store customers pay for them through higher prices.

Cameron:  That's not fair to those who borrow a cart and return it.

Micah:  Borrowing a cart is a privilege, not a right.

Cyndi:  So Jan pushes the ones she finds abandoned back toward the store.  She can't push a cart up the hill while walking the dogs, so she will leave it on the nearby corner, hoping someone going that way will return it or one of the help will see it and come get it. 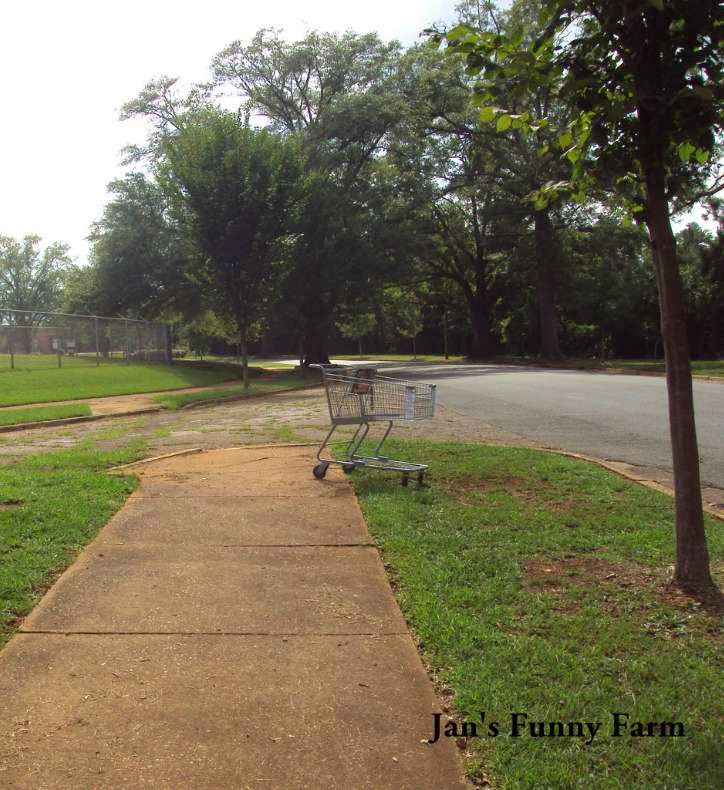 Percy:  Yesterday there were two carts along the walking route. She pushed one toward home on the morning walk and this one on the evening walk.

Sam:  With all the able-bodied humans who walk that route every day, I should think one would say to himself (or herself), Ah, I am young, my hands are free since I'm not walking dogs, so why don't I push this cart back to the store, especially since I'm going there anyway?

Rusty:  Better yet, why doesn't the one who borrowed it take responsibility for returning it! 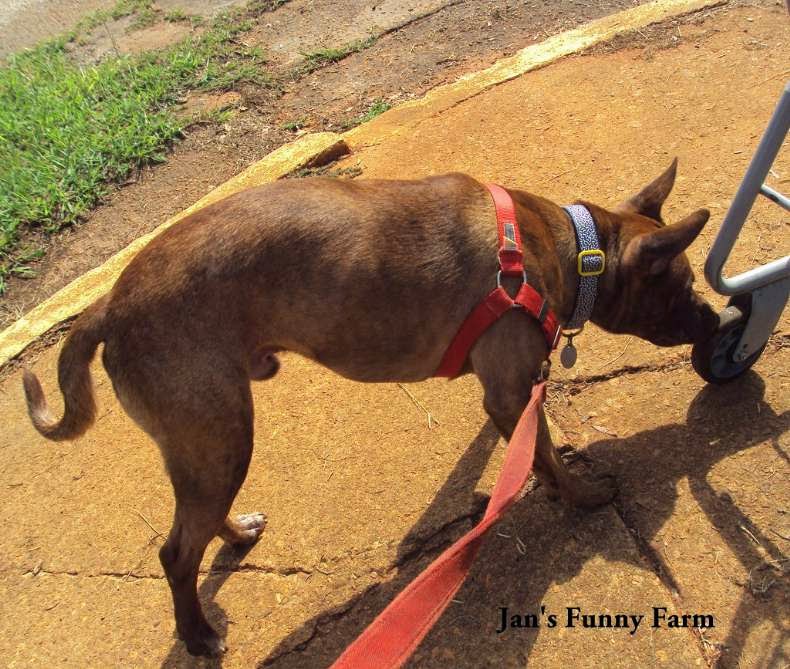 Buddy:  The punishment for those who abandon the carts should be to have to walk it back to the store with Marcus helping.  That would teach them a lesson!

Marcus:  Why, thank you, Buddy.  I didn't realize you think so highly of the help I give Jan.

Buddy:  You might want to reflect for a while on what I said, Marcus.  I think you misunderstood. Here's some video evidence of how helpful you are.

Marcus:  I really herded it showed that cart who is boss, didn't I?  When it got unruly, I spun it around with Jan so fast she got dizzy and the cart almost fell over.  Or was it Jan that almost fell over?  But the cart sure behaved itself after that!

Note:  When we uploaded the video to YouTube, it said it detected our video was unsteady and did we want YT to fix it?  Well, what do we know about video?  So we said yes.  And when it "fixed" it, everything was bouncing so hard we got a bit seasick watching "Jan's Funny Farm" bouncing up and down and seesawing.  We tried to find a way to delete the video but before we did, YT asked if we wanted to keep the "corrections".  No way! 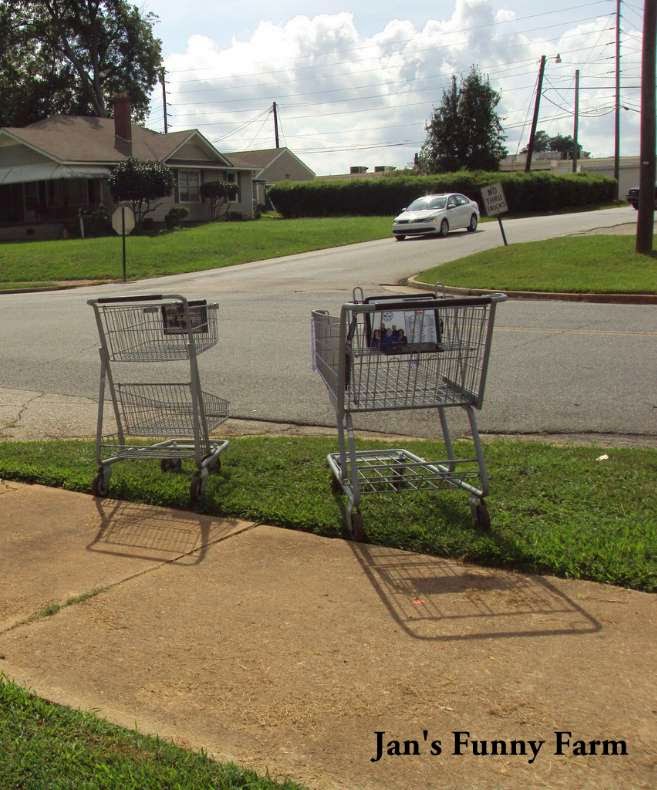