Percy Fix It or Fry It 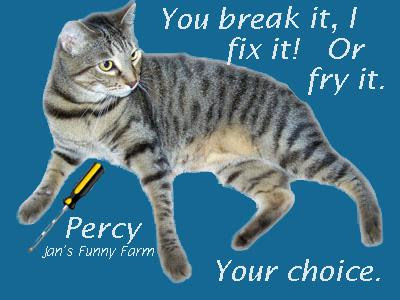 Cameron:  Hey, the Mousebreath dancers made an Easter video with Daisy as a special guest.  They are really good.

Buddy:  We missed this yesterday since we were offline for all but about half an hour.  Jan came home, turned on the computer and ... poof! went the internet.  Again.

Cameron:  Yeah, a couple weeks ago the internet AND the phone died for a couple hours and then did so intermittently for a day or two.  But for months it's been dropping dead in the afternoon for a bit, then returning.  It still hadn't returned by midnight yesterday, although we did have email.  We had to click "Get Mail" and walk away for 5 minutes or so.

Buddy:   It was really frustrating, especially since the company told Jan our internet was working, we were just having a "latency outage."

Rusty: Well, we might not have had internet, but we did manage to email Kiril of Nikita & Elvira's blog and also a local customer to ask if they could google the phrase for us.  The local was having on/off/on/off problems but said he could work around it.  We couldn't.  It's hard to "work around" DEAD!

Cameron: Now we know why our internet has been taking  naps on us.  There are innumerable complaints online about Windstream's poor customer and tech service as they blame everything on "latency outages" that don't seem to get fixed.  If Windstream doesn't get its act together soon, we'll have to send Percy over with a screwdriver to do the job for them.  He's real good at techy stuff.

Buddy: You hear that Windstream? Don't make us sic Percy on you.  He can wave a screwdriver around and spew nonsense with the best of non-repairmen!

Percy:  *trying to look modest*  Thank you, guys.  I appreciate the vote of confidence.  Guess I better dig up my screwdriver, in case.

Buddy:  *whisper*  If you're afraid of sparks, better stand clear of Percy and his screwdriver.