Hey, Cotton here.  Jan chopped off the top of my head in this photo but it's me.  It's been rather tense around here the past couple of weeks, so I decided it's time to have some fun.  I looked up some recent keywords used to find our blog.

janschihwawas - We have no clue what Jan did with her chihwawas.  We weren't even aware she'd ever had any.

sam s farm - No, this is not Sam's  farm. We're the funny farmers and we all own this virtual farm.

modkat siberian  - We didn't realize a litter box can have a nationality.

logos that don't translate well  - This would be an interesting topic, but perhaps we better move on.

pets love twix - Well, we'd love Twix too but it's a chocolate candy bar and we aren't allowed to have chocolate.

funny farm cards by Hallmark - And we're not getting royalties?

goat breakaway collar  - We have posted on goats, but they climbed trees sans collars. .

Rusty is awesome- This was a popular one and Rusty's head is about 2 sizes larger now.

Clydesdale donkey  - A new breed of Clydesdale?  We have a little trouble imagining donkeys replacing the awesome Budweiser Clydesdales.

melted kettle on stove  - Did someone else melt a kettle on the stove or has word spread about Jan's?.

missing bear poster examples - Seriously, how man times have we posted on a missing bear?  We keep ours in the closet so he'll never come up missing.

bell shaped rabies tag silencer - We remember a post about bell-shaped rabies tags, but with a silencer?  We just mentioned they didn't hold up for the 3 year life of the rabies vaccinations.  We never threatened to shoot anyone over it, with or without a silencer.

funny sombrero - Only kind Jan wears.  She doesn't allow sad or angry sombreros in the house. 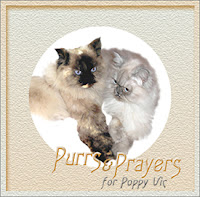 We are thinking of Poppy Vic and Ann of Zoolatry today and tomorrow, as he undergoes a procedure called TACE to treat his cancer.

"Studies show TACE has better results, less side effects, and is easier on the patient, and safer in general.  RFA uses radioactive substances which have on occasion "spilled over" into surrounding areas (not good) ... and after RFA no hugs or close contact with anyone for several days as you're radioactive!

It is "trans aerterial chemo embolization"; they go in through arteries in the groin area; guided imagery; and inject a variety of drugs (including chemotherapeutic drugs) directly into the core of the tumors in the liver, and some of this "cocktail" of drugs is also targeted to surrounding tissue.  The cocktail serves to cut off the blood supply to the live cancer cells, in effect killing them, preventing their continued growth and spread.
He has five active tumors in the liver to be treated.  The tumors present in the lung will still require standard chemotherapy; but that will be postponed until sometime after this procedure."

We are keeping them in our thoughts and prayers and we know you are too. 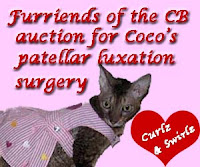 Jan has finished/posted the new auction graphics and the auction for Coco's patellar luxation surgery will begin sometime today, just as soon as Marg is finished posting the items. (That's a lot of work!)  You can grab the graphic for your sidebar to help spread the word.

Teri of Curlz and Swirlz has made a special page describing Coco's "bum knee" journey.  Stop by the Furriends of the CB Auction sometime today and check out the items as they're posted.