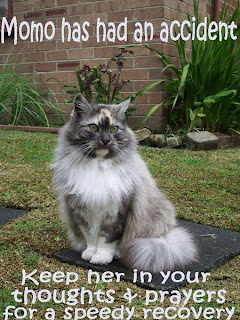 We're late posting this because of limited computer time, and Windows went berserk in the heat again when we tried to post this earlier, so we were forced to shut down suddenly.  But we want Momo to know we are thinking of her. 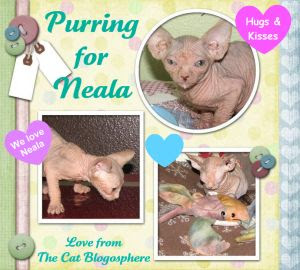 Tomorrow is Purrs for Neala Day.  She is headed to Salt Lake City today for her surgery tomorrow. This is the same rare surgery Maxie needs but her problem is a birth defect.  Mom Trish will keep the Cat Blogosphere updated.

And Sammy Meezer broke a tooth.  He has to go back to the vet Thursday to stay overnight and have surgery to have the root taken out Friday.  Meezer Mom is short of funds unless they give up the internet or something. Can you imagine a whole month without a Meezer update? Or Billy Sweetfeets dancing videos? .  She is always helping others so if you can donate a dollar or two toward Sammy's surgery, it would help.  We don't want that "crazy" bunch off the internet for a month or two.  Readers requested a tip jar be put up so there is one in the Meezer's sidebar.

We're still not officially posting.  Being forced to shut the computer down for hours at a time is actually helping us get some work done. Unfortunately, we're rushing like crazy while the computer is on.  So, bye for now.