We needed a laugh today, so we were pleased a friend passed on a story to Jan. We borrowed it.

We had this great 10-year-old cat named Jack who just recently died. Jack was a great cat and the kids would carry him around and sit on him and nothing ever bothered him. He used to hang out and nap all day long on the mat in our bathroom. We have three kids and at the time of this story, they were 4 years old,3 years old, and 1 year old. The middle one is Eli. Eli really loved Chapstick. LOVED it. He kept asking to use my Chapstick and then would lose it. Finally one day I showed him where in the bathroom I keep my Chapstick and explained he could use it whenever he wanted to but he needed to put it right back in the drawer after he finished.


That year on Mother's Day, we were having the typical rush around and trying to get ready for church with everyone crying and carrying on. My two boys were fighting over the toy in the cereal box. I was trying to nurse my little one at the same time I was putting on my make-up. Everything was a mess and everyone had long forgotten that this was a wonderful day to honor me and the amazing job that is motherhood. We finally had the older one and the baby loaded in the car and I was looking for Eli. I searched everywhere and I finally went into the bathroom. There was Eli. He was applying my Chapstick very carefully to Jack's ... rear end.


Eli looked right into my eyes and said, "Chapped." Now if you have a cat, you know that he is right -- their little bottoms do look pretty chapped. And, frankly, Jack didn't seem to mind. The only question to ask at that point was whether it was the FIRST time Eli had done that to the cat's behind or the hundredth!?!


And THAT is my favorite Mother's Day moment ever because it reminds us that no matter how hard we try to civilize these glorious little creatures, there will always be that day when you realize they've been using your Chapstick on the cat's butt.

And now that we've made you smile, we will update you on Maxie. Have a tissue handy. 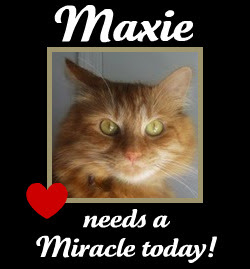 Maxie is still alive after his surgery today, but the vet wants $6000 to insert a stent to hold his esophagus open. It was severely burned during a normal dental procedure due to negligence by the vet. Mom Laura tried unsuccessfully to find a way to borrow the money, so they are forced to choose the other option -- bring Maxie home for a few days so the family can say their good-byes and then have him euthanized within ten days. We are very sad for Maxie and his family.

Even if Laura does take action against the vet responsible, Maxie's need is immediate and it would not help him in time. There is a donate button on Laura's blog, should anyone care to make a donation to Maxie's care.

And as KC has posted on the Cat Blogosphere, "If anyone could help with an idea for a loan, please contact Mom Laura or even KC. They may be able to get the price of this surgery down somewhat."

You can read Laura's Friday update on Maxie's blog. We agree with the comment left by furkidsmom:"We hope that a miracle happens and that Maxie can get the operation."

See, Laura's apartment building burned in 2008 and her three cats were presumed dead. But Mu Shue, Lilly Lu and Iris were rescued a few days later. Mu Shue died of lymphoma and then Maxie joined the family.