Some of you are already aware of know Dogs Deserve Better, an organization devoted to unchaining dogs. Their founder Tamira Thayne was arrested for trespassing in January for providing food, water and straw to 2 chained dogs. In June the dogs' owners contacted her and surrendered both dogs after realizing they deserve a better life than one on a chain. This was filmed the day Tamira picked the dogs up.

They remind us of Buddy, Merci & Sam the day Jan opened the back door and they walked outside for the first time without being attached to a leash. They were so excited when they realized they had the freedom to run and play outside.

We Funny Farmers can't understand the fascination so many humans have with confining a dog to the outer corner of a property to live a solitary life chained, hungry and thirsty, freezing or sweltering, often without shelter -- or at least a proper shelter. This is no life for a child's stuffed toy, let alone a living dog. At least that's what we think about a dog living life on the end of a chain. We're not barking and meowing about a dog that spends some time indoors with family and some outdoors. We mean those dogs who live chained outside 24/7/12, no matter what the season or whether they're sick or old and arthritic.

You can read more on the story of the two dogs on the Dogs Deserve Better website. 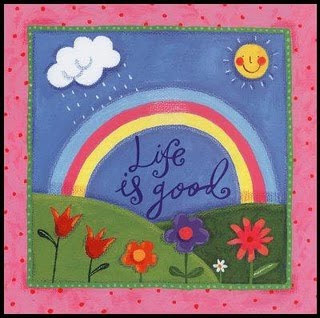 Before we forget,  Jan received the Life is Good award from Karen Jo of Herman's Hideaway today.We just got online and we're already being kicked off, so she'll have to tell us all who she wants to pass it on to another time.  Thanks for sharing this with our Jan. We think she deserves it.

Okay, Jan, do we all get a treat now?  Kidding, we're just kidding.