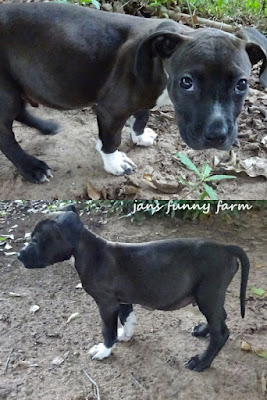 Rusty:  Meet Puppy.  Yes, Puppy.  That's his name.  And he's the third guest to stay at the Funny Farm Hotel in less than a year.

Marcus:  I'm going to have to start charging for the use of my spare crate.

Rusty:  You do and you'll have to start paying Jan for digging it out, setting it up and breaking it down.

Marcus:  What about a tip jar in a corner? 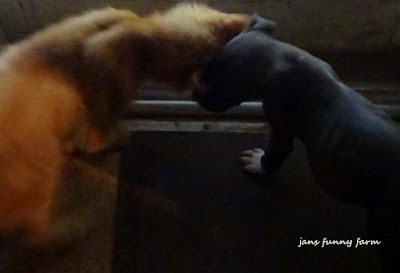 Rusty: Puppy was a pretty cool guy.  Quiet, polite.  Nothing like you Marcus.  He never screeched once!  In fact, when we met at the back door, he lowered his head and I head-bonked and rubbed against him.  Not a good picture but Jan loves the memory. 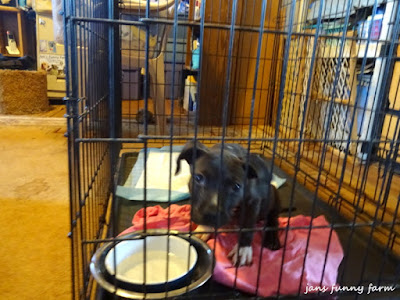 Marcus:  I thought Jan said I was her last puppy.

Rusty:  You were, but a neighbor found Puppy at his back door Tuesday.  Puppy ate all the cats' food outside and went to sleep.  There was thunder and lightning from an approaching storm and the neighbor was afraid the pup would end up in the road hit by a car, so he called Jan. 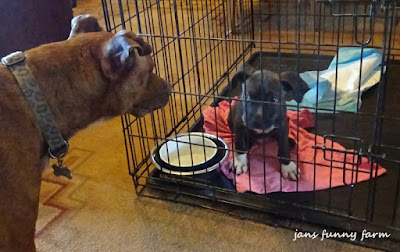 Marcus:  Jan prepared his room and I gave him the house rules.  #1 - I am in charge!

Rusty:  I dare you to say that to Jan.

Marcus:  There's no need to mention that to her.

Rusty:  Jan took a couple of pictures and posted them to facebook.  Lots of helpful people shared her post and at 10:00 pm, she received a message from Puppy's owner.  He had gotten out that morning and wandered off. 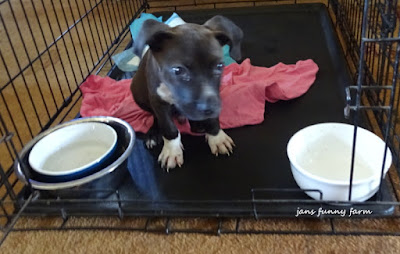 Marcus:  Jan played musical crates again.  Me in my room, Puppy with the run of the house for a while.  Then we'd switch.   He liked his room.  As you can see, the door is open here.  He went in on his own.

Rusty:  He was so neat.  When he peed his training pad, he'd fold it over and then wad it up.  Most of the time he went outside, though. 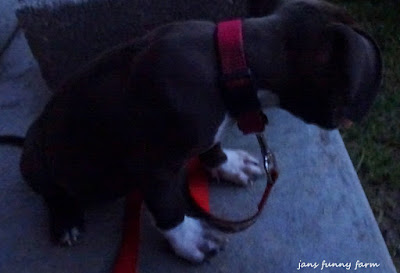 Marcus:  His owner had to work till 8:00 pm Wednesday, so Jan took advantage and spent time sitting out on the porch cuddling Puppy.  He had never worn a collar or been on a leash before but he did well.  Jan said good-bye to him at 9:30.  She enjoyed having him here for a day and a half, but she was glad he was able to return home to his family.

Rusty:  When Jan asked the pup's name, she was told, "My daughter just calls him Puppy."  Although we had never met this neighbor, we did mention her house in our post Strange Plumbing Problems.  Life is full of humor.


Percy:  We Funny Farmer Felines have a new interview for you this week.  Cleo from Peeballs and Poopblogs.  (Blog was named by her angel brother Orbit, not sweet Cleo.) 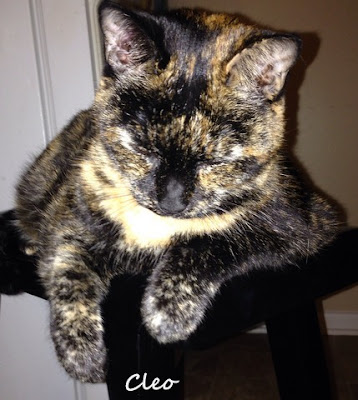