Percy:  After I turned in the key to my Temporary Apartment Two in the cabinet behind the large bowls, I found a somewhat smaller kitchen apartment nearby.

I found I could leap to the second shelf of the microwave stand and crawl onto a plastic drawer container. 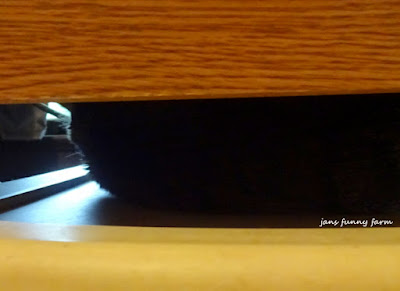 You can't miss me.  I'm the big black blob between the drawer and the shelf in the photo..

It was a nice apartment, close to food and water, and just a hairbreadth nearer to the feline pee and poop boxes.  I'm a senior guy. Things like that are important.

The old neighbors were just a few feet away, but those few feet and the shelf over my head meant the neighborhood was just a teeny bit quieter. 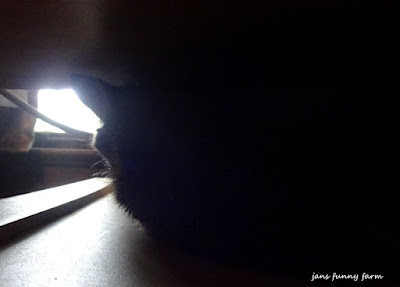 It was a bit of a squeeze but it was close to a window where I had a beautiful view of the muddy dog pen.

I told Jan I would be so happy here if I could roll over on occasion, or even have an occasional guest in for a niptini or three.  She could get rid of the microwave and remove the shelf it rests on.   Then I would even have room to stand up and move around between naps.

Jan leaned down to look me in the eye (or she tried; it was quite dark under there) and evicted me.  "Get out of there!"

I know when I am not wanted and I am a very obedient guy.  I got out of there!

I think moving out of that cubbyhole was one of the best decisions I've ever made!