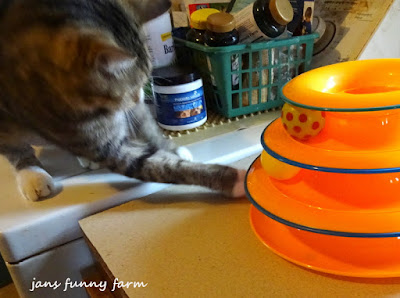 Micah:  Whoa, where did this come from? 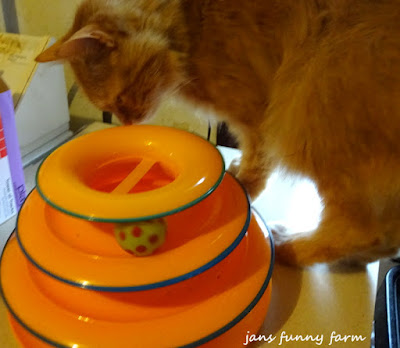 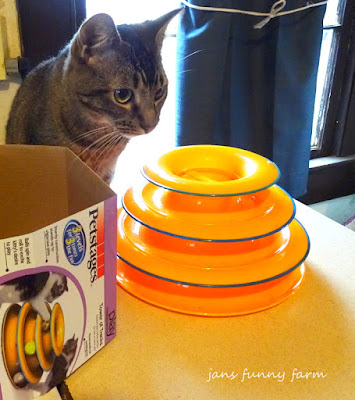 Taylor:  She said it's a Petstages Tower of Tracks and left it here.  The box says it's 3 levels for 3 times the fun.  What fun?  I don't see it having any fun.

Percy:  Yes, it just sits there.  I don't see anywhere to plug it in.  What do you think we're supposed to do with it? 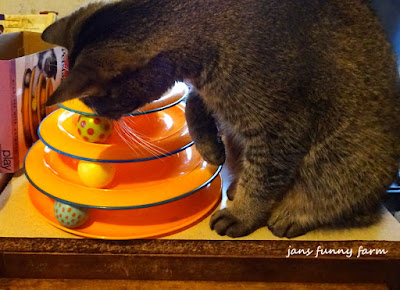 Taylor:  I think we're supposed to keep an eye on it.  In case it wants to run away.

Cyndi:  What do you think would happen if you touch one of those balls? 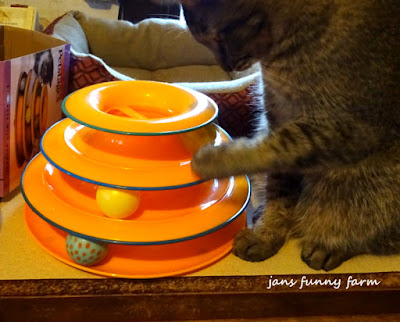 Taylor.  I don't know.  They look so tempting but Jan didn't say we can play with it.

Percy:  When did we ever listen to Jan? 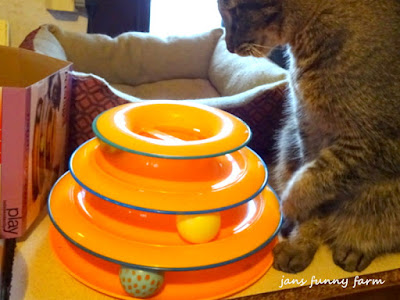 Taylor:  I'm not too sure about this.  I just know we're going to get into trouble if we touch this thing.

Percy:  Jan actually didn't think we older cats would be interested in playing with this much, so she mainly wanted us to review it to entertain Taylor.  Chewy lists several key benefits -


Cyndi:  Taylor is nervous about trying new things so it took her a day or two to get brave enough to hit a ball.  Once she did, she was hooked.

Rusty:  Now we hear Taylor playing with it at odd hours.  The rest of us are a bit ho-hum about toys any more, but Taylor is only a year old. 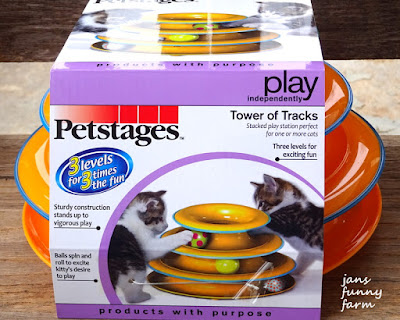 Taylor:  The Petstages Tower of Tracks has non-skid pads at the bottom.  However, it flew off the counter between the washer and dryer the other day when I was playing with it, so evidently it could use a bit more anchoring.

Micah:  It sits on the floor now, so Taylor can play with it but it won't try another solo flight.  We hope Jan remembers it's there so she doesn't take a flight of her own.  She doesn't have an aviator license.

Update:  Last night Jan put the tower on a bureau in the bedroom so she wouldn't trip over it.  Taylor will not go into the living room, for reason unknown, so the choices are kitchen and bedroom.  This morning Taylor was playing with it - not rough and tough - and it started sliding.  A minute later Jan heard the crash as it hit the floor.  The top track popped off.  She picked up the ball and put the track back together.   She wishes it had bigger grips on the bottom but suspects it might not help in the winter when this old house is cold since others have not reported having this problem.

We were not paid for this review, but the tower was provided by Chewy. Chewy is not responsible for the content.