Today is the annual Blogblast4Peace ( #blog4peace #blogblast4peace ), where bloggers join with social media users to post peace globes from around the world. 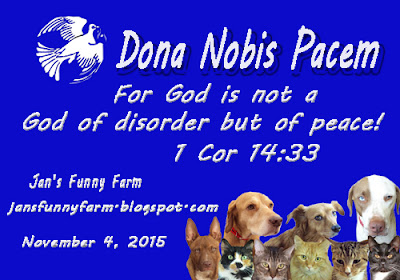 If you would like to participate, there is still time today. Just follow these directions from the official Blog4Peace site --   http://blog4peace.com/
1) Make your peace graphic(globe).
2) Send your finished peace globe to blog4peace@yahoo.com or TAG Mimi Lenox on Facebook
3)  Post it anywhere online November 4.
4) Title your post Dona Nobis Pacem (Latin for Grant us Peace) and your FB or Twitter post #blog4peace #blogblast4peace
5) Enter the blog hop at Blog4Peace url above.

BUDDY:  Do you think anyone would believe how close we came to not being able to post our peace globe today, or at least not until this evening?

PERCY:  Probably not but even thought it wouldn't have been Jan's fault, let's share the story anyway.  It is kind of comical and Jan is still laughing about what happened to poor Mr. Bewildered.

BUDDY:  We returned from our early morning walk yesterday to a message on the answering machine.  It was a bit hard to understand but Jan returned the call.  There was a lot of static on the line, plus a dial tone and a busy signal -- ALL at the same time she was trying to have a conversation. A short one, since they could barely hear each other.

PERCY:  A couple of hours later, the phone rang and her brother's name appeared in caller ID.  As soon as she picked up the phone, the call was disconnected.  She tried several times to return the call but kept getting the static, dial tone and busy signal (hereafter designated SDTBS) simultaneously.

BUDDY:  Finally, she reached Mr. Doug and they tried to open a conversation over the SDTBS.  Suddenly a  male voice demanded, :WHO ARE YOU?"  "Who are YOU?" Jan replied.  The bewildered male voice said, "I was speaking to someone in repair to report a problem with my phone when I was cut off and I got you."

PERCY:  So Jan and Mr. Doug and Mr. Bewildered had a very short old time party line conversation, as they could barely hear each other.  Jan then tried to call the phone company to report the problem.  Despite the SDTBS, Jan heard a distinct echo when the auto responder voice said, "It appears you are calling from..."  - and it usually speaks your phone number for you to verify or correct.

BUDDY:  But the echo duplication stopped after the first five numbers.  The last 5 were different.  Jan was doing the impossible - calling in from more than one phone at the same time.

PERCY:  How could Jan report this?  Aha!  She went to the company's online site and found Live Chat.  She initiated a chat with the subject "phone service is wonky".  Live Chat is not an express way to accomplish anything but a nice man wrote up a repair ticket, saying there were evidently several lines crossed and the problem would be fixed by 7 p.m. today.

BUDDY:  We will spare you the phone "fun" of the next few hours, but Jan left for errands at 2 and returned at 4 p.m.  The internet was dead and so was the phone.  We were not only cut off from contact with the world, but there was little hope for finishing this post for today.

PERCY:  And then, half an hour later, the dead phone rang!  A cheerful repairman said he was right outside.  He had found and fixed the SDTBS problem.  We did a happy dance.  We hope Mr. Bewildered  had reason to do a happy dance too.