SAM:  Buddy's birthday was Friday and we had a quiet celebration.  Well, it was quiet until Marcus started singing Happy Birthday in that high tenor that sounds more like a soprano yelp he has.

BUDDY:  Saturday morning I got this lovely birthday card from WeBeesSiameezers. Thanks, Pipo and Minko.  And thanks to all who took the time to leave a comment or send an email. 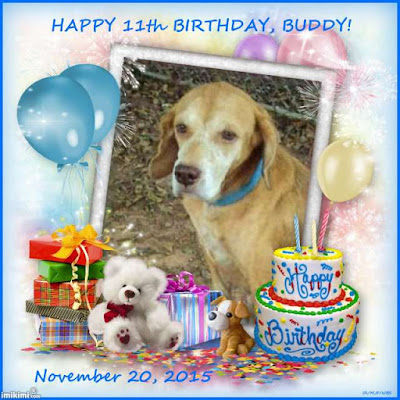 RUSTY:  Buddy had a good birthday.  Jan had a stressful day.  It was one of those anything that can go wrong did days.   For example ...

MERCI:  So he couldn't steal any more bowls of cat food, Jan blocked Marcus's access to the food bowl with a dishpan blockade on the dryer and a small cooler on the stool.  Because of that blockade, Micah and Percy accidentally bumped into one another and got into a knock-down drag-out, things flying, kitchen heater pilot light snuffing battle.

CYNDI:  Late that afternoon Jan heard strange sounds coming from the kitchen.  Marcus came to sit beside her.  He was licking his mouth.  Jan checked the cat food bowl.  Every crumb was gone and the bowl was damp.

PERCY:  Jan put Marcus in a time out in his crate.  She still can't figure out how he accessed the food blockaded into a corner (against a wall) on the dryer.

MICAH:  After a while she put the dogs outside.  Marcus came inside trying to get Merci or Sam to wrestle, which he isn't supposed to do in the house.  Not that he pays attention.

RUSTY:  Jan yelled, "Marcus, do you want to go back in your crate?"  Marcus stopped dead.  He looked at her, looked at the crate, looked at Jan and walked into his crate.  Wow, déjà vu.  We can remember posting the same event a while back.  Guess Marcus recognizes when Jan has had e-n-o-u-g-h!

MARCUS:  That was not an admission of guilt or wrongdoing.  I had merely decided I wanted to have dinner in my private dining car; however, Jan said she wasn't a waitress and my dinner was later served in the kitchen.