I thought it was hard to bury Cameron on Friday.  It was hard to bury him again on Saturday.  But before I tell you that peculiar story, I would like to thank everyone for the kind facebook and blog comments and emails.  I do intend to thank each of you individually after I recover from the past two days. 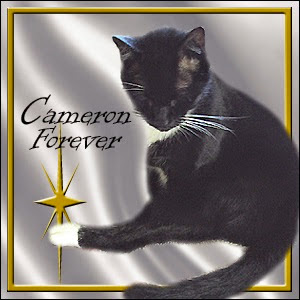 Meanwhile, thank you Miss Ann the Zoolatry Human for sending this lovely graphic after our Friday post. 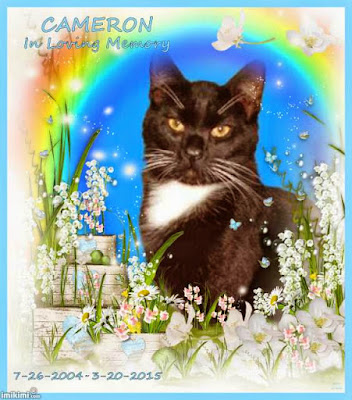 And We Bees Siameezers made this lovely graphic on imikimi for us.  Thank you, Ingrid. 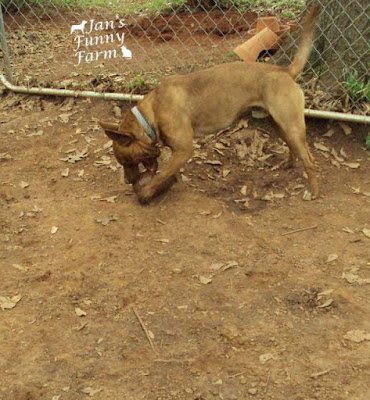 Just over Marcus and to the right of our logo, you can see the area where I tried twice to dig a grave so Cameron could be buried beside his old Funny Farmer siblings but the Georgia red clay is rock hard and I had to change the plan. 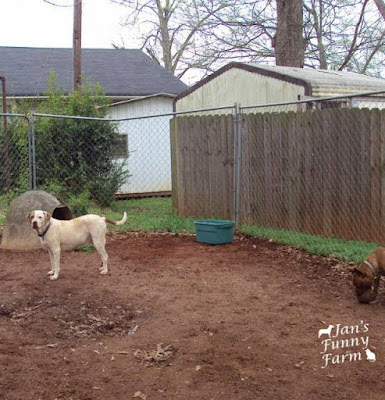 I decided he would be safe inside the pen.  It was not any easier and I could only manage a shallow hole.  Marcus didn't want his friend buried and dug up the dirt as fast as I could shovel it in. After I finished, I half-filled a large plastic storage container with water to temporarily protect the grave.

Late that night all the dogs in our corner started barking. It was more intense than usual. The 2 dogs next door could be heard scratching and beating at their wooden fence.  I had a hard time getting my dogs inside but they finally came.  There was nothing to be seen and I wasn't about to go back near the alley late at night.  And whatever the ruckus, it was out of sight.

I was up with Marcus about 3 times during the night.  Each time he went out to the container and stared toward the corner of the wooden fence.  He didn't want to come back inside. 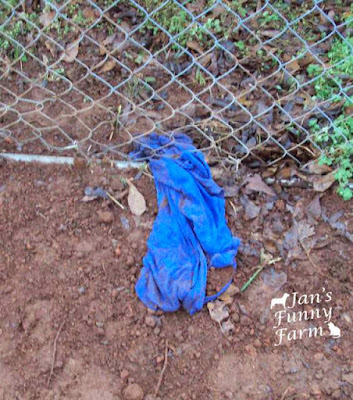 After the sun came up, I let Marcus outside again and saw this.  It's the shirt I wrapped Cameron's body in before burying him.  There was a small shallow hole dug under the end of the container.  Something strong had dug just far enough to grab the body and pull it out so the grave collapsed on itself.  Something strong had worked an opening at the bottom of the chain link just barely big enough to drag Cameron's small body through.

A coyote can leap over a six foot pen.  It can climb a chain link fence.  There are coyotes in this area.  I saw one for myself last August or September.  Cameron was gone! 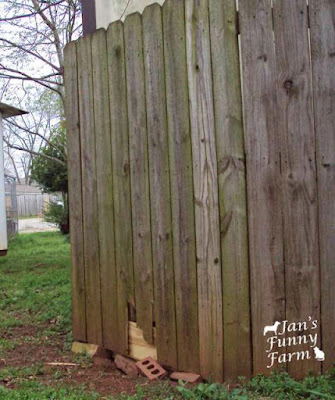 Thankfully, I found his body in the area under our logo in this picture.  This photo was taken after the hole in the fence was boarded over and bricks spread to "fill in" the hole that was dug.  That patch is just out of sight around the corner in the photo below.  That's why Marcus had stood staring.  Cameron was on the wrong side of our fence. 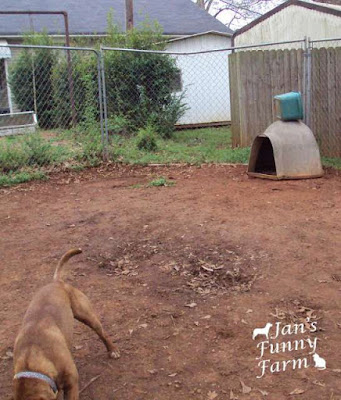 I went next door.  The guy was at work.  When his girlfriend checked, his dogs were missing.  She called and he came home to search.  Fortunately, he found them a mile down the road. I am so grateful those dogs are safe because I really believe they broke out of their yard in time to chase off one the predator(s) carrying off Cameron's body.

Marcus was so happy to have Cameron back.  I tried to dig deeper but couldn't, so I wrapped Cameron in two plastic bags and tied them closed.  Then I moved the dog house over the grave and perched a container on top to discourage any idea of using the dog house as an entrance or exit aid.  Marcus is quite the athlete.

Marcus became attached to Cameron the last couple of months and is acting out his stress.  He started three fights with Sam (one included Buddy) before breakfast Saturday and two more last night. I hope all the Funny Farmers will calm down soon and there won't be any more midnight raids in the back pen.  And definitely no more grave digging!
Pawed by Jans Funny Farm at 3/22/2015 05:00:00 AM