A New Life For Luke

CYNDI:  We are really glad to write today's post.  It's one of the happiest we've ever published.  But first we'll give you just a short background refresher. 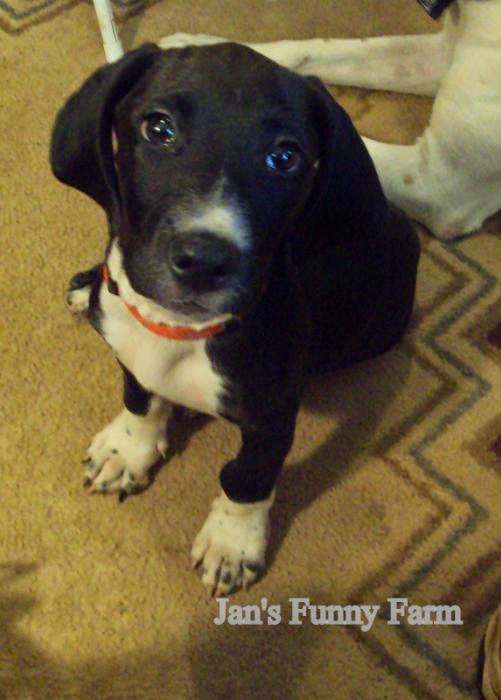 BUDDY:  Do you remember this handsome face?  It's Luke the Pee Machine.  He arrived on July 13, 2013 and lived with us for five weeks and then was returned to his owner. We introduced him in This Intruder Chews.

MICAH:  We still have some photos we intended to publish of some of the things Luke chewed, but we never got around to it.  For example, he chewed two extension cords.  Jan bought two replacements and laid them on the desk.  Percy knocked them on the floor and then there was only one replacement cord.


CAMERON:  Unfortunately, Luke "loving" family was not loving.  A kind neighbor let Luke stay in a dog house in his fenced yard so he didn't have to live chained or locked in a shed.  His sister-in-law, Teresa, bought Luke from the family so he would be safe, even though she couldn't keep him.

MARCUS:  I was just a little guy when Luke came over for some play dates.  He was a gigantic dog by then.  At least in comparison to me.  Teresa worked very hard to find Luke a home and eventually did. But one day this winter, the people contacted Teresa and told her to pick him up right away.  She had no place to take him.  We can't take in another dog, so Jan contacted someone she knows locally who helped Teresa get Luke into an out of town rescue.  Teresa paid to board Luke for a week and then drove him to Atlanta.

MERCI:  In a few days, Luke was on his way to Alpha Dog Rescue in Maine. Luke went into foster care and we all (including Teresa) prayed Luke would not only get a happy home but be able to be an inside dog again.  After a while, we learned he had been adopted.

PERCY:  Then on Friday the 13th, Jan opened an email titled "Pupdate on Luke" and started crying.  We thought Luke had died.  (Humans are so weird!)  We asked permission to share this with you.

Hello there!!
We are writing to give you an update on "Luke" aka "Nonodon'tdothat" aka "Pee Machine". We have re-named him Benny!
We adopted him about a month ago from Alpha Dog rescue up here in Portsmouth NH.
He is still a ball of energy, occasionally pees in the house, chews literally EVERYTHING, pulls when walking on a leash, and can be a toy stealer!!!
Regardless, he has completely stolen our hearts with his big brown Bassett mix eyes!!! He LOVES everyone and is eager to give kisses!! He is extremely smart, he learned to ring the bells on the door  to go outside after us showing him once (our other pup still doesn't get this!).
He has become quick friends with our 3 year old American Bulldog, Rosie and is a typical younger brother. She sometimes gets annoyed and will go off on her own for some peace and quiet, but usually she loves his playfulness!!
We ALWAYS have him on leash, except at the fenced in dog park. His nose gives him an uncontrollable wanderlust and we are not tempting fate!!! We're saving to fence in our yard this year!!!
We know he needs some basic training and some manners, but he is a one-of-a-kind lovebug, that's for sure!
We wanted to thank you for your kind heart and helping Luke/Benny through his tough time. If it wasn't for you we wouldn't have been able to give him his forever home!!!
A big thanks from Elise, Matt, Rosie and Benny!!!!

SAM:  And then they sent photos for us to share. Here are Luke and his new sister Rosie.  They also sent a video of the two playing with a tug toy but we aren't posting it.  It warmed our hearts to see he is so happy. Teresa will be elated! 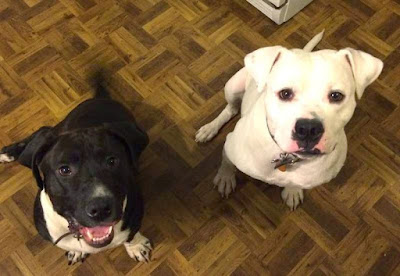 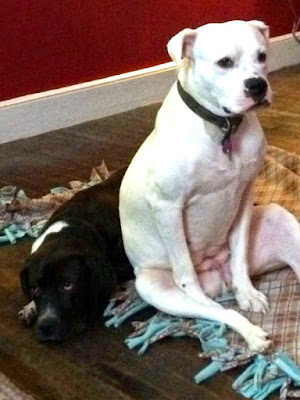 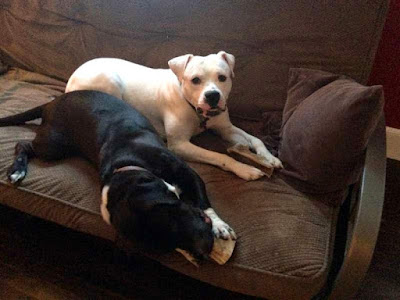 RUSTY:  Luke/Benny will turn two years old in a month or two. He's had some very rough times, but now he has an indoor home and a forever family.  We wish all stories could have such a happy ending ... or rather, a new beginning.  There are a number of folks who have helped him in some way, including Mark in Texas, but Teresa deserves so much credit for all she has done to find him a good life.  And thank you, Elise and Matt (and Rosie) for opening your hearts and home to him.  We hope he will be ringing your bells for many years to come. 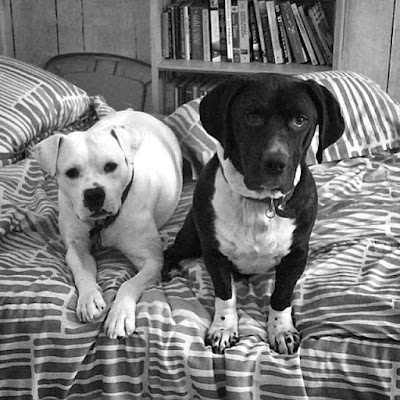