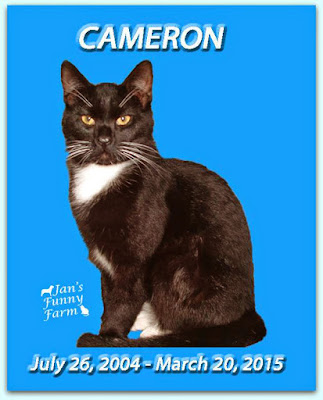 I had no clue I would be celebrating the first day of Spring by digging Cameron's grave.

He has not been doing well since I had that bad fall in the beginning of February and we were recovering together.  Yesterday, Thursday, he ate well and was as affectionate as ever.  Last night, when I went to bed,  he climbed over the pillow and cuddled with me for a long while.  Then he went to sleep in the bed I'd made for him between the headboard and the pillow.

I had an offer of a ride to walmart today and he died shortly before the appointed time.  I bought a new shovel, thinking it would be easier to dig his grave.  It could barely cut the ground..  My old shovel worked better in this hard clay.

I wrapped Cameron in one of my summer shirts.  All the Funny Farmers were given an opportunity to say good-bye.  Marcus bathed him. (He has been giving Cameron a good bath every night and several today.)  Buddy opened the screen door to come outside and make sure I dug the hole properly.  (I didn't. The ground is too hard for me and I can't dig a grave deep enough but there was no one to help.)

Cameron was born next door and moved in with us because he loved his best friend Merci and wanted to be an indoor cat.  He was the calmest of the group.  He never raised a paw or started a fight. His biggest annoyance was his habit of closing his eyes or turning his head when I tried to take his picture, so I have few decent photos of him.

Farewell, my handsome tuxedo. I am going to miss you something fierce!