Loulou has said it would be okay to share her fun suggestion to keep coyotes away from our pen.

Get your brother or any MALE to pee all around your property and the coyotes will NOT be happy and they will NOT come around after a few pees. The other thing to strew around is manure from lions, if you have any.

Loulou suggested it because her mama actually went to the zoo and GOT lion manure when the coyotes were slithering around Beverly Glen Canyon in LA and her kitties were out often.  The coyotes would come in back of the house and yip at night...sort of high, wild notes that make her not want to go in the yard! 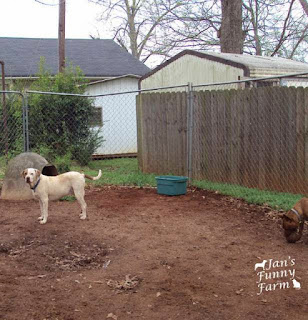 We're not sure a pee competition would be legal here in town and Jan doesn't think she could ask anyone to enter.  Not with a straight face, anyway.  But the lion poop sounds like a great idea.  We don't have a local zoo, but we will have Jan knock on some neighbors' doors.  If none of them have any, perhaps she can order some on Amazon.com?

A while ago we decided this would be, for the most part, a fun blog.  There is too much pain and sorrow in the world and we all need laughter in our life.  We think we were doing so-so at entertaining readers, until Miss Klutz took up flying again in the beginning of February.

To review just the high points:  In one crash landing, she managed to sustain two head injuries (same head, separate injuries) that gave her a beaut of a hematoma and two black eyes.  Plus injuries to her neck, one hand, a shoulder, her back and both knees.  She has not been a good patient.  Humans with a head injury are supposed to rest.  She slapped a bag of frozen peas over her face, made a phone call, finished a partial cleaning of the bathroom and then vacuumed the house.

After a week, she tried  to resume walking the dogs and was "roughed up" by a territorial dog that tried to attack - twice.  In between those two dog events, Marcus was physically attacked by a neighbor's dog.  He came through it with a small cut under his eye.  Jan managed to stay on her feet but had chest pain and trouble breathing. That was about the time she lost her sense of humor and energy and although we've turned the house upside down, we haven't been able to figure out where she lost them.

Then one week ago Cameron died.  Jan tried to dig a number of holes in rock hard dirt/clay. She finally managed a small one and buried him.  Overnight, a coyote came into the dog pen and stole Cameron's body, but the dogs next door broke out of their fence and the body has been re-buried, but only after a dozen or more attempts at digging a new, deeper hole. The coyote must have come back two nights later and we didn't get much sleep worrying about the dogs next door breaking out and not being found again.  Fortunately, as hard as they tried, those hero dogs did not escape and were safe.

Digging those holes, left Jan barely able to stand, walk or sit all week.  Her thinking has been fuzzy, too. 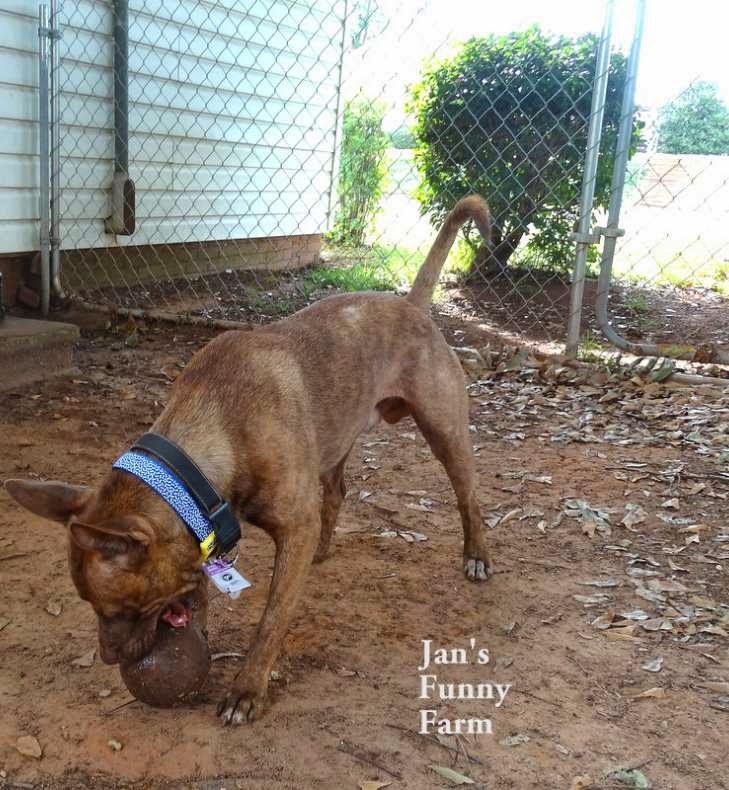 This, as you know, is Marcus.  He is no longer a puppy but when excited or playing canine soccer, he sings in a continuous soprano. Or if you prefer, in a very high tenor.  Guess he will now be singing opera.

Yes, arrangements were finally made for Marcus to be neutered.  Monday night Jan set the alarm for 6:45 to call her ride at 7 a.m., as requested.  When she decided to get up without the alarm, she found it was already 7:15.  It turned out, she had actually set the alarm for 7:45.

After Marcus was left at the vet's, she fed the rest of us, then herself.  As the coffee pot heated, she realized she had set the pot of water on the warming pad instead of pouring it into the machine.

She did remember to set Buddy's 2-step stool on the porch to help Marcus into the van.  When she arrived to pick up Marcus, the assistant asked for his leash. Leash?  Uh ...

Her ride thought these things hilarious.  They scared the he** out of her!  She has not just been feeling "out of it", her pain level has been through the roof!  So we will be around even less while she tries to rest and recover.  There will be no Mousebreath interviews until then.

Oh, and you won't believe this, but Jan has another black eye.  Nowhere near as colorful as the first two.  While Jan was trying to sleep Wednesday night, Cyndi leaped over her head.  A back paw kicked Jan's eye as she slipped and left a small cut.  It wasn't Cyndi's fault.  Jan should have moved her head out of the way. Right?