Hannah and Lucy Plus Zoolatry 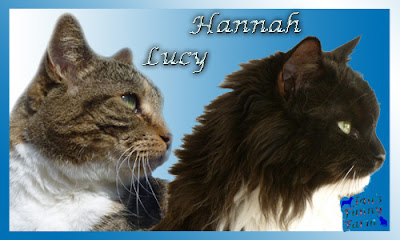 Our special guests today are the lovely Hannah & Lucy from the United Kingdom. We asked Jan to make this special graphic before we sat down to interview them for Mousebreath.  So stop by to read Dainty and Darling Hannah & Lucy.  and meet the ladycats if you haven't already, or get to know them a little better. 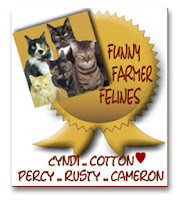 We were a little late posting the interview today.  It's been a crazy week.  We haven't even had a chance to read all our email from Thursday yet.

For example, yesterday Jan didn't turn on the computer until late afternoon.  Yes, we could have pushed the buttons to turn it on ourselves, but now that we're older, we're not fond of being in the doghouse.  Well, Rusty is, but he thinks he's a dog, so we overlook this peculiarity.

Why were we computerless for umpity (or is that umpteem) hours?  Well, to start with, Jan learned a few days ago she had to be in court early as a witness.  So she got up an hour earlier, walked and fed the dogs, but didn't have the time to feed us kitties.  If we didn't have a bowl of crunchies handy, we would have all STARVED TO DEATH while she was gone.

She did get home in time to feed us a late breakfast because after sitting on a narrow, hard bench in the hallway for 62 minutes (yes, she timed it), she finally got to go in and sit down on a chair.  Less than five minutes later, everyone was excused because the defendant requested counsel.  So she'll have to repeat this too-early morning wake-up on another date when there will be attorneys present in court.  She better get up TWO hours earlier then so we cats don't DIE OF STARVATION while she's off having fun.

But even though she got home in time yesterday, did she feed us kitties a late breakfast?  No, she cleaned and "organized" the desks, then went off to lunch with friends and STUFFED HER FACE while WE STARVED!

And when she came home, she spent the rest of the day working on graphics for Zoolatry's auction.  As you know, Poppy Vic has been very sick and went back in the hospital again Wednesday.  Ann has had to do a lot of distance traveling to and from hospitals and is deluged with extra expenses and medical bills.  So the CB is putting together an auction to try to help.  If you have anything you'd like to donate, contact ML or Marg.  Their contact info is in the Furriends of the CB auction sidebar right under this graphic - 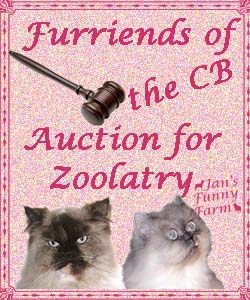 The auction might start tomorrow. .  It will be announced on the CB.  If you'd like to help Ann and Vic now, you can use Zoolatry's Starving Artist Fund button in their sidebar.

Jan is praying for Poppy Vic and Ann.  We're sending lots of purrs and pawhugs!