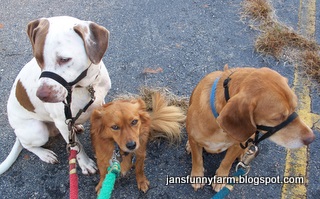 Hey, Sam, Merci & Buddy here today.  We decided to do some detective work and track down a mean person or persons.

Merci  ** Buddy, are you sure we can walk to Massachusetts and back before dinner?  It's already kind of late in the day and Jan tires so easily.  Not to mention I'm no spring chicken any more either.**

Why would we want to hunt in another state?  Because we think they could use some good tracking woofies there.  Actually, we wouldn't even have to leave the state of Georgia to fill a gigantic cell full of the same type of humans..

See, a friend sent us a link to this story today and we went looking for the original.  We were pleased to find a  story and video on My Fox Boston.  We hate stories like this one but we are glad to find a happy outcome for the dogs.

Miracle is well-named. She is a one-year-old pit bull mix that was abandoned in an apartment with no food or water for nearly two months. Her leap for food and safety last Friday broke her hip and hind leg but her timing was good and a policeman pulling over to the curb saw her jump and called Animal Control.  Miracle was taken to a vet and had surgery on her leg.

When an Animal Control officer went into the apartment for the second time (on Monday,), a four-month-old puppy was found in shock, barely hanging onto life. They named her Gracie and although she spent some time in ICU, she is recovering.

Both dogs will be put up for adoption after they recover.  We thought we would join the hunt for the person or persons who abandoned these sweet dogs.  We're not too good with paperwork but you wouldn't want to be a criminal with us three sniffer dogs on your scent!

Don't be afraid to view the video.  Miracle is obviously a happy girl despite everything that's happened to her, and she's doing well enough she was able to go to the TV station for the interview.

Starving dog jumps from third-floor window in New Bedford: MyFoxBOSTON.com
This case is not being ignored or taken lightly.

""This constitutes felony cruelty against an innocent animal,' said Lt. Alan Borgal, director of the Center for Animal Protection at the Animal Rescue League of Boston. 'We are counting on the public to step forward with information to help bring the person or persons responsible to justice.'


"Anyone with information is urged to call New Bedford Animal Control Officer Emmanuel Maciel at 508-991- 6366."

The Animal Rescue League of Boston could use some help with vet expenses, if anyone should care to donate. You can read the entire article here.  There is also a very short second video in the upper left of the page.
Pawed by Jans Funny Farm at 10/07/2011 04:36:00 PM