JFF has 3 birthdays in July, so we're going to incorporate them into one party post, but we'll tell their stories individually. We know when Cameron was born since he was born in the house next door. We know approximately when Percy was born since he was so young, not even weaned, when Merci rescued him. But Merci's age is a mystery.

We're going to tell Percy's story today. This is his day.

A few years ago, while Merci was walking Jan, Jan heard one of those birds that drive her crazy because it sounds like a tiny kitten crying. Merci ran to the old mill fence and used her I-found-a-cat whine. The more Jan tried to move her on, the more frantic Merci's whining became.

And then from under a bush crawled a wee kitten. Merci was ecstatic. Jan raced her to the mill office to let them know she needed help, rushed home to grab a carrier in case the kitten was afraid of Merci and arrived, panting, back at the fence before two maintenance workers arrived.

One scooped up the kitten, searched the area for possible other kittens, unlocked the gate and placed him in Jan's carrier. Jan swears Merci was walking on clouds, her feet never touching the ground, as they walked home. Passersby smiled at Merci, her head high and her plumed tail waving at warp speed.

Percy is Merci's cat. Yep, Merci is the only woofie we know personally who has two rescued cats of her own. But Cameron's story will have to wait until later this month.

We have trouble believing you ever sounded like a bird, but Merci says it's true. We hope you'll be around for a lot more years.

We've been hiding a few things Sassy sent for our birthday guys and gal. When Sassy gave Jan the palm pilot for her birthday last month, she also sent a calendar with the July dates because -- Well, you know why ... Jan forgets. We just love this calendar she made. Click to enlarge it. 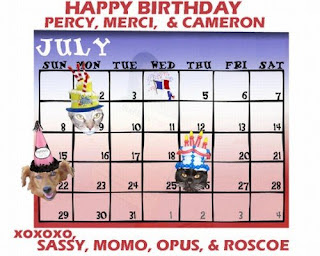 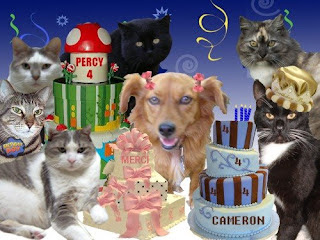 The 3 got these lovely birthday cakes from Sassy, Momo (Momo is spending the summer with Sassy while her SS is working in China.), Opus & Roscoe.

Despite our fridge being nude on the outside, we do have lots of goodies on the inside. Tuna, ham, crab and shrimp, for starters. There is plenty to go around. And lots of cake! We didn't organize an official party. But any who stop by, even if for the first time, please feel free to help yourself. We would just set out the food, but it isn't a good idea in this heat. 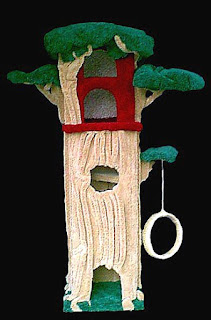 Sassy sent this great tree tower. Percy is beside himself. He can't believe he has his own tree.

Sassy, this is Percy. Thank you for the tree and the cake.