Percy: What about Marcus?

Taylor: I wouldn't call him perfectly normal about anything. Marcus must be related to Micah.

Percy: Why would you say that? 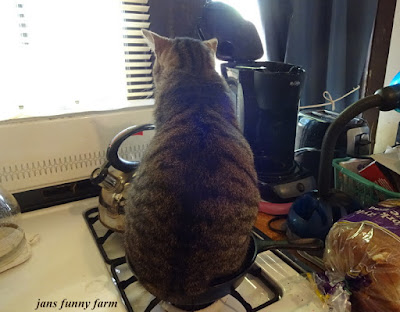 Taylor: Do you remember this picture of Micah sitting in a cast iron skillet on the stove? He said the pilot light keeps the pan warm.  (Butt Warmer Skillet) 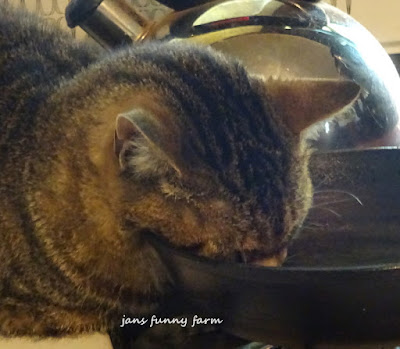 Taylor:  Then he took to sleeping with his head in the skillet.

Percy:  He said it protected him from brain freeze. 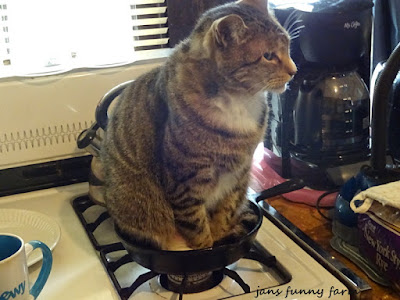 Taylor:  Jan got tired of washing the skillet without having used it, so she turned it over on the burner.

Percy:  And Micah took to sitting on top of the bottom of the skillet.  (There are no pictures.  Just flip the skillet in your imagination.)

Taylor:  Have you ever sat in or on a skillet to keep your brain or your butt from freezing?

Taylor:  Have you seen any other of the Funny Farmer Felines doing so over the years?

Taylor:  If Marcus could climb on the stove, do you think he would skillet-sit?

Percy:  Now that you mention it, I do. He would need a much larger skillet, though.

Taylor:  Don't worry, Jan has a larger one.  I was just pointing out that skillet sitting or sleeping is not normal.


Percy:  But I can see it now.  When we're freezing next winter, we won't care about "normal". We'll have to all huddle together on the stove for warmth.


Taylor:  In that case, we'll probably need a bigger skillet.