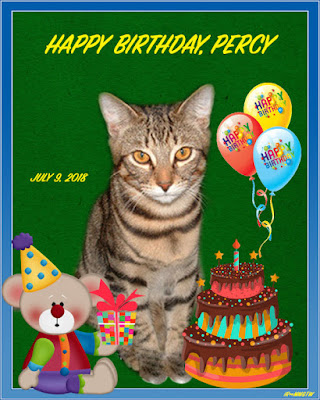 Happy 14th Birthday, Percy!  You have come a long way since Merci rescued you as a tiny kitten.  You grew into a handsome, cuddly guy.  We all love you!   Well, perhaps not Micah, but in general, you are loved.

Thank you, Pipo, Dalton & Petcretary for the birthday graphic!


Marcus:  Since today is a special day, even though it's not Tuesday or Friday, we thought we would share some of why we haven't been around very much.  Jan is swamped with both indoor and outdoor work, and our computer has been spending a lot of time with a blank screen.  A really nice friend has been helping us get the grass cut, but there is so much more that has to be done.  And with all the rain we've been having, everything is growing faster than usual.

Rusty: Two years ago Jan, with a little help from Mr. Doug, sawed some branches on the tree outside the pen.  The branches were so long and the leaves so dense, no sun could reach the dog pen and all the grass died.  Now the branches have grown so much the side yard is in danger of dying too. 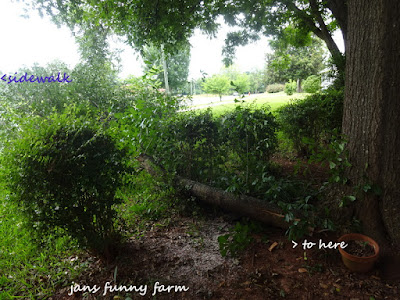 Marcus:  So Sunday Jan decided to cut down one of two huge limbs reaching almost to the sidewalk.  She tackled the larger one.  She sawed and sawed and finally the limb came down.  But just before it did, a man who turned out to be a new neighbor was passing and asked if she needed any help.  When the branch falls, the saw on the pole causes Jan to lose balance and she has a hard time holding onto the pole, so she took him up on that last little bit.  The long branch crashed, taking out half a bush. 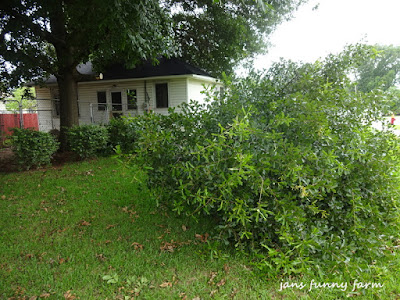 Rusty:  Then came the really fun part!  The branch was waaaaaay too long to put out for pickup.  It had to be sawed into smaller parts.  Evidently it's actually harder to saw a branch on the ground than on a tree.  It was interesting to watch Jan sweat as she sawed away without getting anywhere. 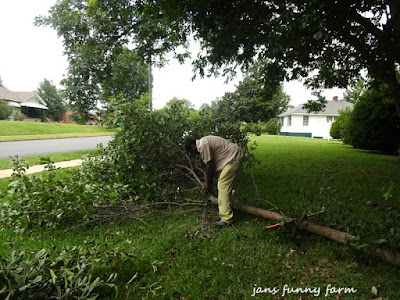 Marcus:  And then this nice man named Willie appeared  around the tall, leafy end of the tree asking if she needed help.  She started to say no, but the past couple of years have taught her she can't do what she used to force herself to do, so she accepted. (Willie said it is okay to post this picture of him working.) 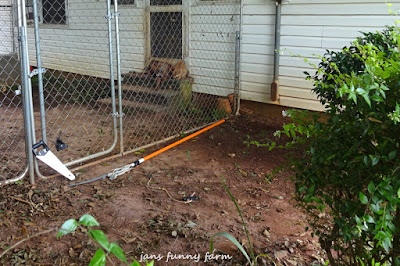 Rusty:  Marcus and I laid on the steps and snoopervised.  That's hard work too.  As you can see, all they had to work with with a small saw and a saw on a pole. 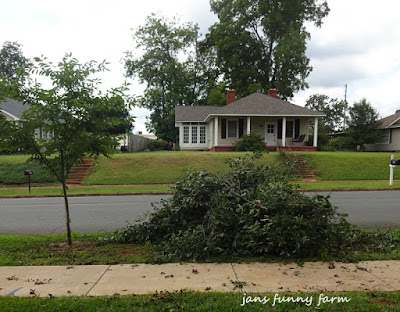 Marcus:  Then Willie piled the pieces by the curb while Jan raked up the loose leftovers.  Willie said, "The Lord must have led me this way today."  Jan is so thankful for that!  She could not have lifted or dragged those last two pieces of the branch.

Rusty:  As much as she claims to hurt, it's good she was rescued and didn't have to saw that branch for pickup.

Marcus:  Speaking of pain, what's with Jan limping and moaning about the pain in her ankle being worse than the pain in her neck and shoulders.  I didn't see her standing on her head sawing with her feet, did you?

Rusty:  No, but I sure would have liked to.  There's another big branch she'd like to cut down. When she finds someone with an electric saw, we can snoopervise again.  But this time we won't blink!