Cyndi:  Hey, Marcus, have you seen our recent house guest in icing yet?

Marcus:  I don't remember having a house guest in icing.  Is that a new fashion?

Cyndi:  No, silly, it's a cake a new member brought to the local Humane Society meeting Tuesday.  Actually, it's a cupcake cake.

Marcus:  I never heard of a cupcake cake.  Is it made of cake or cupcake batter?

Cyndi:   It's made from cupcakes and icing in whatever shape a customer wants. Jan thought it resembled Bear and took some pictures. 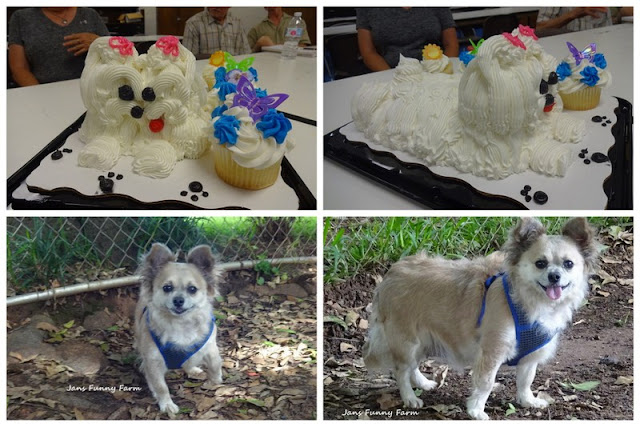 Marcus:  Hey, that does resemble her somewhat, but it's hard to tell for sure.

Marcus:  It's hard to tell since the closest look I had of her was when she was on her back pummeling me on the nose for being polite.  (The Mini Bear)

Cyndi:  You're several times her size and you were trying to sniff her butt.  What did you expect?

Marcus: It was a misunderstanding.

Cyndi:  Yes, it was.  I hope you learned a lesson.

Cyndi:  Never underestimate the ingenuity of a female!  You'll get kicked in the nose every time.