Half of Ten Centuries 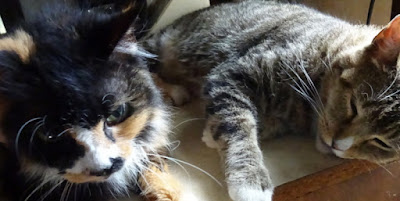 Cyndi:  Well, here we are again trying to come up with a post at the last minute.  Must be the heat and humidity fogging our brains.

Cyndi:  I thought it is Jan's brain that's snoring.

Micah:  Perhaps.  Or fogging.  Whichever. It doesn't take much to confuse her as to which day it is any more!

Cyndi:  No, but after last week with the internet problems, it's no wonder she has a foggy, snoring brain.

Micah:  Right.  Jan called our isp (internet service provider) on Monday about our wading through molasses internet speed.  It was so slow we published our Tuesday post Wednesday. ( Our Wednesday Tuesday Post ) We didn't know if they fixed it or not because on Tuesday the green high speed cord came apart and Jan had to call again.

Cyndi:  At least we had some internet speed when she plugged in our old white phone cord.  But was it fixed on Wednesday as promised?  We had no way to tell until we got a new green cord.

Micah:  She was surprised when she got an automated call just after 5 pm on Friday telling her someone would be here the next morning between 8 am and noon.  "Press 1 if you are still having problems."  Jan almost followed instructions, but she missed the 1 and disconnected the call.

Cyndi:  She went into a panic and immediately called the company.  "Don't worry,:" she was told.  I see your appointment was changed from Monday to Saturday between 8 am and 7 pm."  (What Monday appointment?  And the phone robot had said between 8 am and noon.)

Micah:  Jan was reassured someone would show up the next morning.  She hung up, glanced out the window and there was a company tech approaching our porch.  "Is it Saturday already?" she asked.  "No, I finished early and your ticket was pulled."

Cyndi:  Two hours later we had a new green cord and our internet was bouncing along at the proper speed.

Micah:  Jan thanked the nice tech for not showing up the following Monday (yesterday) so he could keep the Saturday appointment last Friday.

Cyndi:  And then she was thoroughly confused as to which day is which.  But it's all sorted out now because today is a familiar day.  It's her birthday.

Micah:  I forge. How old Jan is today?

Cyndi:  I'm not sure.  I think she's half of ten centuries.

Micah:  Oh, she's not as old as I thought.  She still has a few good years left.

Cyndi:  Did you get her anything special?

Micah:  I've been lying here thinking she'd probably love to have a fresh caught mouse, but I haven't ever seen a mouse here.

Cyndi:  Neither have I, but I've heard you can order anything on Amazon.