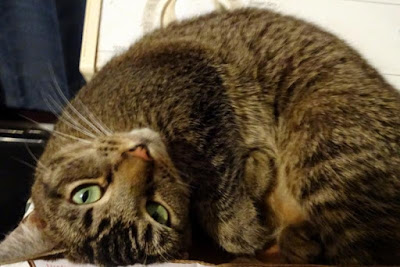 Taylor:  I'm feeling a bit upside down discombootalated.  Could you explain that again?

Merci:  I think you mean discombobulated, bit it makes perfect sense, if you think about it.

Percy:  Yes, We had Jan make this award for our blog back in 2014.  She didn't know we intended to present it to her.  The time has come to bring this award out of retirement.

Marcus:  And you're going to present it to her again?  Her birthday is coming up later this month.  Couldn't we give her flowers instead?

Cyndi:  We could if we had some cash.  This won't cost us anything.

Taylor:  I still don't understand why we would give her a klutz award.

Micah:  To reward her for all those exciting flights and crash landings she's become famous for, not to mention extra chuckles such as the underhanded ball playing that resulted in Jan's finger colliding with Marcus's teeth.

Rusty:  I agree she's is a good source for our humor material.  She does deserve recognition for creative accidents.

Taylor:  What did she do this time?

Micah:  Surely you heard her scream and saw her almost go headfirst down the porch steps Wednesday?

Taylor:  The neighborhood probably heard her,  But what caused that?

Marcus:  It was't me!  I had nothing to do with it!  I wasn't even outside at the time.

Rusty:  We know that, Marcus.  But I'm curious too.  What happened?

Cyndi:  I saw it from the window.  Jan grabbed the railing as she bopped down the steps.

Merci:  So Jan didn't just grab the railing;  she grabbed a wasp on the railing and it stung her finger - twice!

Percy:  Evidently, not only was the pain worse than when she was stung in the arm last year while she was trimming bushes, but when the pain eased, the fingers on that hand itched so fiercely, she couldn't stop scratching for quite a while.

Rusty:  I must have been napping then.  I only knew about the angry wasp that went after her when she tried to let it outside and she whacked it head-on with the glass door.

Taylor:  I think we should present the award to the poor wasps instead of Jan.

Taylor:  When the branch snapped last year, Jan accidentally hit one so hard with her arm she killed it, though not before it stung her.  For all we know the one on the railing was crushed, even though it managed to sting her twice.  And she cold-cocked another with a door.   Which do you think deserves the award the most - Jan, or the wasps? 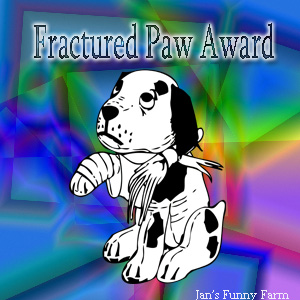 This award was first presented to Jan in Fractured Paw Award.  And subsequently in Fractured Musings and two other posts.