Percy: Hey, I protest! You two keep hogging the posts with your photos. It's either you guys or Marcus.  The rest of us want equal time. 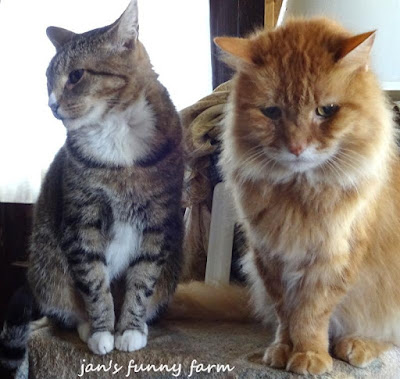 Micah:  It's not our fault Rusty and I are so photogenic and pose so nicely together.

Percy:  Micah and I don't like each other so I don't think you're going to get us to pose together.

Micah:  You should try it sometime.  It's really fun to have a friend.

Percy:  Okay, I'll just go sit on the other side of Rusty and Jan can take a picture of the three of us together.  Or sort of together.

Rusty:  Oh, no, you don't!  I'm not sitting between you two.  I don't have any claws to defend myself.

Micah:  I don't blame you.  Percy likes to attack for no reason.

Percy:  Attacking you is not for no reason.  I have to defend myself.

Micah:  Are you claiming I instigate our battles?

Rusty:  I think I hear some kibble calling my name in the kitchen.  Somehow I think I will feel safer in another room.  If you will excuse me, I'll just tiptoe out of range.

Micah:  That sounds like a good idea.  I think I'll have a snack too.  If you'll just move out of the house, Percy, so I can get by you... 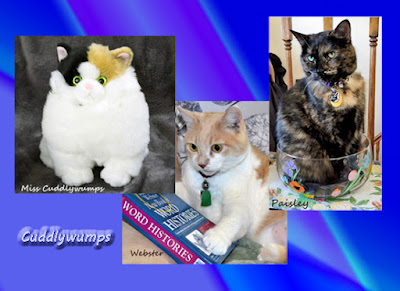 Rusty:  Since Percy is otherwise occupied after being pushed off Marcus' crate by an unnamed assailant, I'll go ahead and announce our interview subjects for this week are from Cuddlywumps Cat Chronicles.


Stop by Mousebreath, the ezine for cats, to read Miss Cuddlywumps, Paisley and Webster.  mousebreath.com

We are joining the Pet Parade hosted by Rascal and Rocco and co-hosted by Bionic Basil and Barking from the Bayou.
Pawed by Jans Funny Farm at 2/09/2018 12:00:00 AM