Percy:  I think Merci has an admirer.

Percy:  Yes, the other day when Jan was playing ball with you in the dog pen, there was a tuxie cat in the next yard watching.  We thought he (or she) was watching you.

Marcus:  Everyone watches me.  Jan says I'm not only good-looking, I'm fast and agile.

Percy:  No,  while you were huffing and puffing from the exercise, the tuxie suddenly jumped up and raced along the pen and stopped at the tree, where he stood for a while staring at Merci. 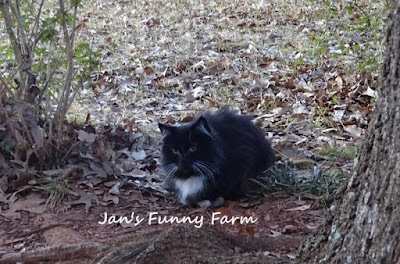 Marcus:  What was Merci doing to attract a cat?

Percy:  Nothing.  She was just doing her usual, walking up the steps to get inside and when the door didn't open, she would go back down and wander around in the corner.

Marcus: I didn't see any cat.

Percy:  You were too engrossed in the ball.  And when Jan saw the tuxie stalking Merci, she used the ball to lure you in the house so you didn't scare the cat away.

Marcus:   Are you certain the cat was only interested in Merci?

Percy:  Positive!  Before Buddy, Sam and you came along, Merci was a cat magnet.  She rescued me when I was very young.  Cameron was so attached to her, he used to wait outside to follow Merci on her walks; then when he got tired, Jan would have to carry him home.  Finally, he just moved in.  And when it was just Merci and Jan, more than one cat used to follow them part way.

Marcus:  Wow!  I didn't know that.  Did Merci wear catnip perfune to attract them?

Percy:  No, silly.  They must have sensed her gentle nature.   I'm just amazed that tuxie was so interested in getting closer to Merci that he paid no attention to you.  You're hard to ignore!

Marcus:  I must be losing my magnetism.  I need to find it again.  What should I do?

Percy:  Oh, I don't know, but you could ask Merci for her secret.

Marcus:  I didn't know Merci has a secret.

Percy:  That's because Merci is calm and doesn't babble all the time like someone we both know.