Our adorable calico Cyndi turns 14 years old today.  She has come a long way from the tiny, stray kitten with the massive amount of fur living in Mr. Doug's engine hiding from Tippy, his dog.  Her long fur was twice as thick as she was wide. (It was early February and the weather was freezing.)

She is not as spry as she used to be, but she still purrs at the drop of a hat and is just as feisty.  We are thankful she is still with us to celebrate.

Merci:  What are you doing on top of the old computer, Rusty?  The party is down here. 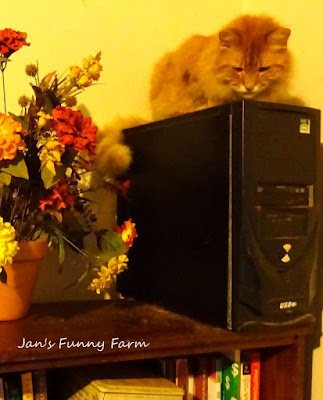 Rusty:  Cyndi wants to know who ate her cake and I'm staying up here on the bookcase until she finds the culprit.

Merci:  She knows it wasn't you.  You're too polite to steal someone's birthday cake.  And we know it wasn't Marcus because he would have eaten the whole cake.

Rusty:  Then who ate it?

Merci:  You see how neatly that last piece has been sliced?  I suspect there is only one here who could do that.

Rusty:  Who would that be?

Rusty:  Are you going to tell Cyndi?

Merci:  No, she'll figure it out when Jan brings a knife to divide the last slice between the rest of us.

Rusty:  Whew, what a relief!

Merci:  So, are you coming down now?

Rusty:  No, I like it up here.  Jan can deliver my crumbs to the top of the big bookcase after she finishes apologizing to Cyndi. 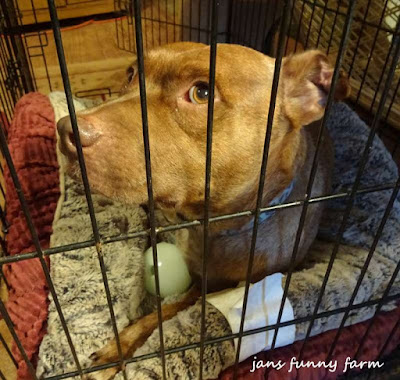 Marcus:  By the way, last week I was thankful for My New White Ball.  I hate to tattle on her, but I think Jan ate it.  I haven't seen it since and I've looked everywhere!  Under, over, in, behind ...

Jan:  You have that backwards.  I think YOU ate it!  And I am the one who looked under, over, in and behind everything in the house without success.   I think you need to pay for your next new ball yourself.

Marcus:  Okay.  Can you loan me a couple hundred dollars?