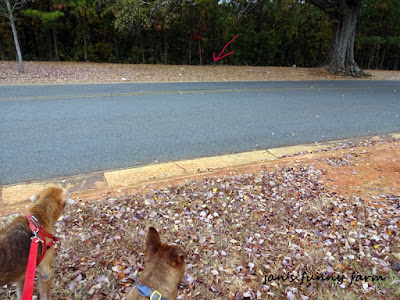 Percy:  What's the red arrow in the photo for?  Is that where Jan lost her memory?

Merci:  I wish.  It would be nice if she could find it, but that's where our new friend was foraging for food when Jan FINALLY snapped a picture while we were walking her Monday. 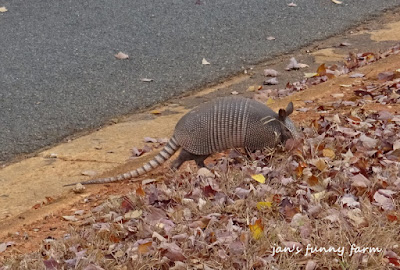 Buddy:  I can't believe she is so slow.  Our friend the armadillo was only about 2 yards from us - on our side of the street - foraging for food.

Merci:  We started to move in for a closer look and Mr. A (excuse us if you're a Ms.) wandered into the street, u-turned to avoid a car, came up on the sidewalk, and then started across the street again.  That time he kept going.  And yet, he was almost to the trees before Jan managed to snap another shot.

Percy:  Marcus said you were all frozen in place watching Mr. A walk in front of a moving car.

Merci:  Yes.  The driver stopped and Mr. A continued on as if he were in a crosswalk and had the right of way.

Percy:  Do you think he might have been trying to hotfoot it away from Buddy doing his urp-urp-urp seal  impression?

Merci:  Good point.  For once, Marcus was quiet.  Tugging and dancing, but quiet, and Buddy was the noisy one.

Buddy:  I believe it took her so long to take the shot because she wanted a picture of our ears in the same picture with Mr. A and Marcus was so into his dancing, he kept moving out of the shot.

Percy:  Seriously?  She wanted a picture of your ears?  Why aren't Merci's ears in the picture too?

Buddy:  Because she likes to keep her distance from Marcus. 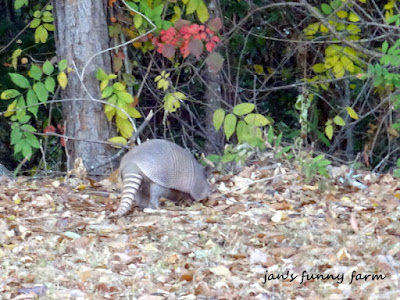 Merci:  We also saw Mr. A on our evening walk on Thanksgiving.  Marcus hollered across the street and invited him to dinner but he just kept going.  He must be deaf.


Just for fun:  In case you've never seen an armadillo, this is what they do to forage for food - what Mr. A is always doing whenever we've seen him.  Not very exciting but they are so fun to watch.