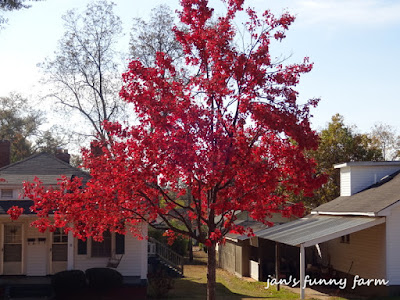 Merci:  Not too long ago we mentioned the only sign of autumn we would see on our walk was one small tree.

Rusty:  Saturday Jan suddenly realized that autumn has truly fallen, as we now have signs all around us and snapped a few pictures.  Don't you just love the beautiful red of that tree?  It's almost as lovely as our red-headed Merci. 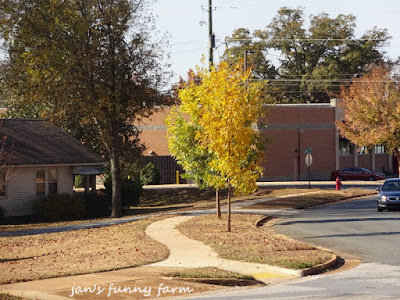 Cyndi:  It seems strange that last weekend we had freezing nights and this weekend we're having the same type of temperatures. 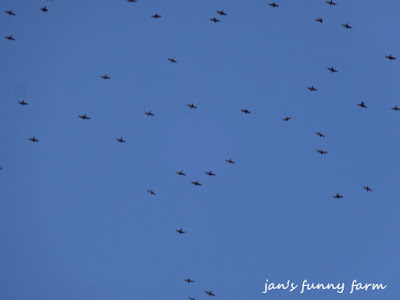 Rusty:  While Jan was admiring the trees, a flock of small birds flew over, circled around and headed across the street and up the hill. The flock was much larger but Jan had to zoom in to get any in the frame.  You have seen previous samples of her zoom aim.  For instance, the headless hawk.  So we're very happy she actually captured some birds in the picture.  We could be posting just a blue blank for your viewing enjoyment.

Cyndi:  We thought they were airplanes in the sky when we first saw the larger version of this picture.  That was a bit scary because why would there be a host of planes in the sky unless we were under attack.  Jan said a synchronized poop attack would be the worst we'd have to worry about from them. 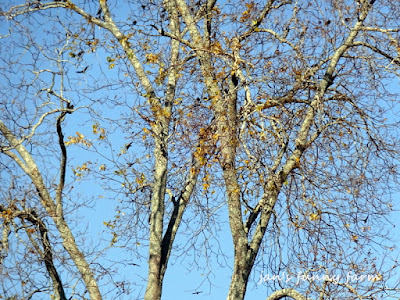 Merci:  And this was their landing destination.  We hope all the flocks of birds flying over at this time of the year will arrive safely at their winter home.

Cyndi:  Let's just hope Marcus doesn't decide to invite them all to lunch.

Rusty:  Wait a minute.  That actually sounds like a tasty ... I mean, a great idea!