MICAH:  We are so ashamed.  With all the upset over Sam, we completely forgot about Cyndi's birthday until someone left a comment today.

MARCUS:  If I had known, I would have shared my beef ear chew with you.

CYNDI:  No, you would not have shared with me!  And what would I want with a beef ear chew?

RUSTY:  The point is it is Cyndi's birthday and we don't have a present for her.

PERCY:  If we could get it for you, what would you most like to have, Cyndi? 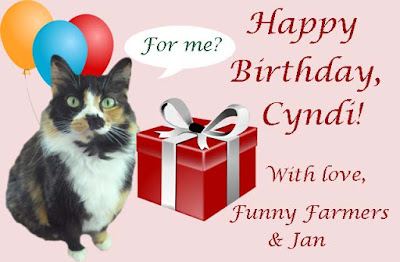 CYNDI:  Thank you, guys.  I appreciate that you care.  If I could have anything I want, it would be for Sam's brain to heal from the stroke and Buddy to feel better, too.

Jan:  The weather recently turned cold again and Buddy doesn't do well in the cold.  I did an update on Sam yesterday but it was a backward instead of forward day.  He barely ate, but he isn't stupid.  He inhaled the chicken for my sandwich when I offered it.  A friend invited me to lunch and I left Sam asleep, gated in the bedroom.  I came home to find him standing at the gate, his body in the bedroom and his head between the kitchen wall and refrigerator.  No telling how long he was like that.

I was scooping dog kibble into bowls Sunday morning and turned to find Sam's face and shoulder against the hot metal grate of a gas space heater.  It was going at the time.  He doesn't seem to have much, if any feeling on that left side.  I caught him before he was seriously burned.   Later, he was cornered in the bathroom between the tub and toilet, head down, trying to move the toilet tank out of his way.  Some time later he crossed a blockade to wedge himself between the bed and a 5-tier shelf.  He was trying to squeeze between the shelves and the wall.  Even with all that was on it, it was moving, swaying and things were falling off.

I feel like I'm living in a war zone.  Blockades everywhere and sometimes they don't work.  He is a big dog and despite his disability, a strong one.  Last night he was a jack-in-the-box.  I'd get him into bed and half an hour or an hour later, he'd be up again.  Instead of his usual 2-hour at a time wandering, he walked - inside and outside - for 2 hours and 40 minutes this morning.

He needs constant attention and the only time I can do anything is when he is sleeping.  Visiting and commenting are on hold.

A little comedy.  Yesterday I picked up a chicken to cook for Sam.  I left it, covered, to cool on the stove.  I surprised Micah just as he was ripping off a whole chicken leg.  He took off so fast the chicken leg went flying the opposite direction.  Never a dull moment around here.