Opus and Roscoe just sent us a group photo from Venice. That's Percy in the big black hat on the left. With all those cats and woofies packed in the gondola, it might be a good thing a well-muscled, professional gondolier and not Momo is steering.Photo by Opus & Roscoe. 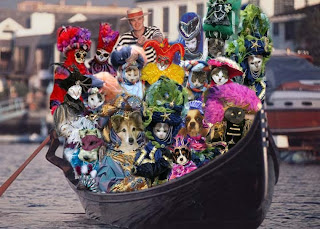 **************************
We just have to speak on Michael Vick this morning. For those who don't live in the US, he was the Atlanta Falcons football hero who fell hard and heavy after being indicted on charges related to running a dogfighting operation.

We're not into sports but we do know something on the subject of abuse. And Michael Vick is an admitted abuser of pit bulls he owned and paid others to train to fight.

He is currently serving a 23 month sentence in a no prison bars minimum-security barracks-style atmosphere with low-key inmates. (Compare this to the "prison life" he gave his pit bulls.) This sentence can be reduced by up to a year if he completes a drug rehabilitation program. He is looking forward to resuming his football career before too much longer. Some of his dogs, -those that survived - are serving a life sentence of canine-style psychological problems from the abuse they suffered at his hands.

Thankfully, only one of those rescued was deemed dangerous to humans and euthanized and the rest were evaluated and are now in rescue groups and foster care. Eventually, some will be put up for adoption and the rest will be cared for the rest of their natural lives.

But are you aware that Vick and his employees are responsible for pulling out all 42 of the teeth of one female pit bull? Her tongue hangs out of her mouth because her jaw was broken and healed awkwardly. She is covered with puncture scars and was obviously repeatedly force bred. The rest have lived through hell too, but this one most likely suffered the worst of the abuse.

So what did we read in the news this morning, but that when Vick gets out he must "divorce himself from the posse." In other words, his downfall was his "posse."

Excuse us but baloney! (We just made Buddy and Samaritan hungry.) Vick is responsible for his own downfall. And for his own lies. Plus, Vick was the one with unlimited funds to support Bad Newz Kennels and even we animals know the man with the money calls the shots. Vick was not a poor dumb pawn in the clutches of the "posse." He led the posse. And they all got off way too easy.

So we don't care how many millions Vick is losing while in prison. What we care about are the dogs he is responsible - in person or through his agents - for abusing and sometimes killing. Vick needs a change of heart and he isn't going to find it with people defending his actions because he is a big sports "star."
*************************************
As we have mentioned before, we are not fond of PETA, even though it sends people undercover to investigate allegations of abuse. Their own hands-on "shelter rescue" tactics leave so much to be desired, we prefer to let this article titled "Reclassify PETA as a Slaughterhouse" speak for us.
Pawed by Jan Price at 2/11/2008 12:14:00 PM