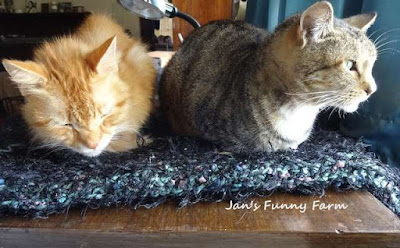 Rusty:  Hey, turn off the light.  I'm trying to sleep.

Micah:  I can't turn it off.  That's sunlight. Besides, you don't want to sleep away the day.  We have things to do.

Micah:  We can think about that.  There's no rush.

Rusty:  I've been thinking a lot about Buddy lately.  Yesterday would have been his 13th birthday.  It still seems strange he's not with us.  Especially when the phone rings.

Micah: Yes, he did love to howl when the phone rang.  He taught the other dogs to do the same, but they stopped when he passed away.

Rusty: It's been pretty quiet around here since.  Or it would be if Marcus would lower his volume.

Micah:  I would have thought his voice would have dropped a few dozen octaves during his four years.  How much longer do you think we'll have to listen to his his hyper screeching?

Micah:  We should add that to our list of things to be thankful for - most of us still have our hearing.

Rusty: .Jan said we're having a quiet Thanksgiving.  And I happen to know Marcus won't be here.

Rusty:  I emailed him an invitation for Thanksgiving dinner at the White House.  He accepted.