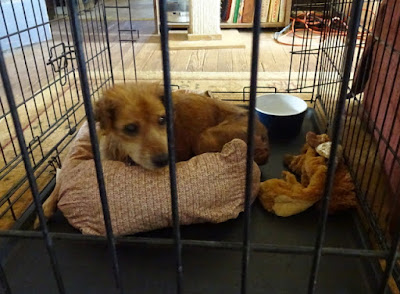 Merci:  Well, it's about time!

Rusty:  It's about time for what?  We've already had breakfast.

Merci:  It's about time our guest left so I can have my private room back..

Rusty:  That's not your private room.  That was our guest room for the past few days.

Rusty:  I hate to spoil your plans, but you had better make that a short nap.  Jan is planning to break this dog crate down today.

Merci:  Then get out of my bedroom so I can enjoy some privacy.

Rusty:  Privacy?  You really think a room with bars is private? 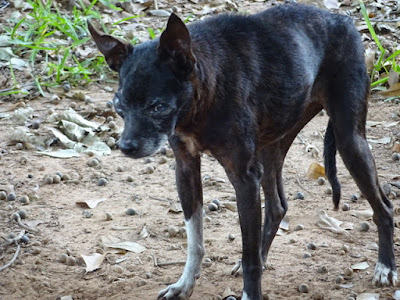 Some of you have asked about our guest since we mentioned one in yesterday's post.  Here she is.  She was picked up on a country road on October 29th by a young woman who reached out for help to vet her from the local humane society (not a shelter!) because the dog has an injured eye.  She could not keep the dog there too long, so last Friday this old lady came to stay with us while we searched for her owner.

It has been an interesting few days.  As any regular reader of this blog is aware, Marcus is not a gentle soul.  He is hyper and a bull in the china shop.  We all know to keep out of his way when he's excited but this dog was old and small (6 lbs when she arrived and 8 lbs yesterday).  She would be easily injured.

So Jan spent the time playing musical dog crates.  When Marcus would go in his crate to nap, Jan would let the guest out.  When she went back in her crate to nap, Jan would open his door.  And then there were all those trips to the dog pen at all hours for pee/poop detail.  Marcus and the guest did meet on a few occasions, with Marcus checking her out doggy style.  The times when Marcus would go hysterical because he was about to go for a walk, or eat, or go outside to play fetch, he would wake her up and she would eventually give one high-pitched yelp that to Jan sounded very much like "SHUT UP"!

Merci slept in her bed against the outside of the guest crate, but she really, really, really wanted to move in!  Jan had to keep shooing her out.

Yesterday Jan and Kay (both with Upson Humane) started a serious Found Dog campaign on Facebook and the pictures/info were shared, shared, shared.  Jan shut down about 10 pm.  At 1:30 am, the owner suddenly saw her dog "all over facebook".  Barbara, the owner, called Jan this morning. 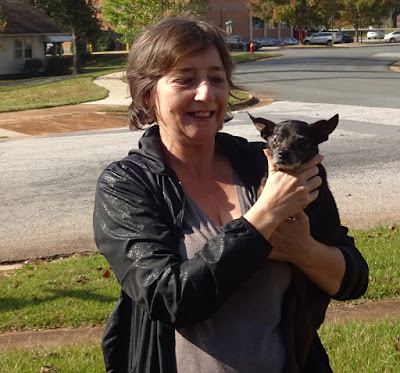 Jan immediately called Kay and as she was telling her the news, that quickly the daughter-in-law Michelle was at our door, with Barbara on her cell phone.  Our guest responded to her voice.  There was no doubt those two were family!  Kay "flew" here for the reunion, too.

Cricket the dog is a Reindeer Chihuahua and is older than we thought, about 20 or 21.  She had just wandered off and her family, fearing she was dead, had been frantically looking for her. 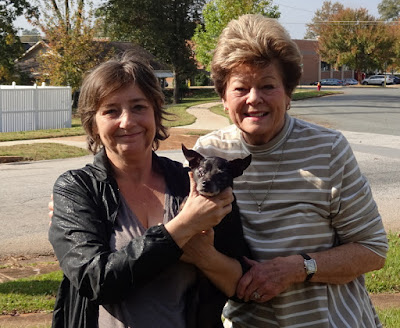 Now you know who was visiting with us and why.  Michelle and Kay (above) are ecstatic Cricket is safely home. We are, too, and so are a whole lot of people on Facebook.

Merci: Will you guys please type quieter!  I'm trying to nap before Jan kicks me out of my room again.