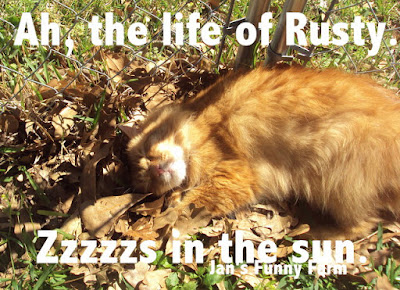 This was Rusty this morning. The photo was not taken today but this is what he loves best about being outside in the pen - sunpuddles and rolling in the leaves and grass. At such times he is quite vehement about not wanting to come back inside.


For those of you who commented on the photo of Jan's ripped jeans at the bottom of Wednesday's Yummylicious (dog biscuits) post, we especially enjoyed the advice to not tell Jan if she forgot to change between walking with the dogs and going to Bible study.  Unfortunately, she did remember to change out of her hole-y (thanks for the new word) jeans.

For those who said duct tape would solve the problem, we assure you that if duct tape was the answer, she wouldn't have lost so much blood or so many clothes to the Car Seat Ripper.  Duct tape does not fix everything!  Neither does beating a spring down with a hammer!


We have written several times on Dogs in Brazil, a rescue run by Jan & Carlos who have lost just about everything but are still helping dogs.  They are working on non profit status so they will be able to help more.

We saw an article by Jan (not our Jan) today on Care2.  It's Guga's story.  We remember how worried Jan and Carlos were about him, an old dog living on the street and in need of medical care.  They  rescued him just days before the horrible mudslides destroyed villages and killed so many humans and animals a year or so ago.

Guga has a new life.  And we're hoping things will soon turn around for Dogs in Brazil.  Stop by Care2 and read Guga's story..

And we hope you will stop by Dogs in Brazil blog occasionally and leave a comment.  They've had a long hard road and they haven't given up or abandoned the dogs in their care.   That says a lot!


Well, Jan is headed out the door to hike on some errands.  The car seat attacked her Monday while her brother was working on it and then yesterday she and the car had to be rescued.  The car is sitting on the front lawn but she says she'd rather hike and haul than drive and shake.

She's so thankful someone was willing to come help her with the car .  There was a very nice older lady across the street who kept crossing the street to check on Jan.  Before Jan left, the lady crossed the street again and shook Jan's hand, saying, "I know who you are."

"Yes, you live over by (she named our next door neighbors) and you have dogs in your back yard."

Well, Merci, Buddy & Sam are walking around with swelled heads now because they're so famous strangers know where they live.  A pawtograph, anyone?
Pawed by Jans Funny Farm at 4/13/2012 02:36:00 PM